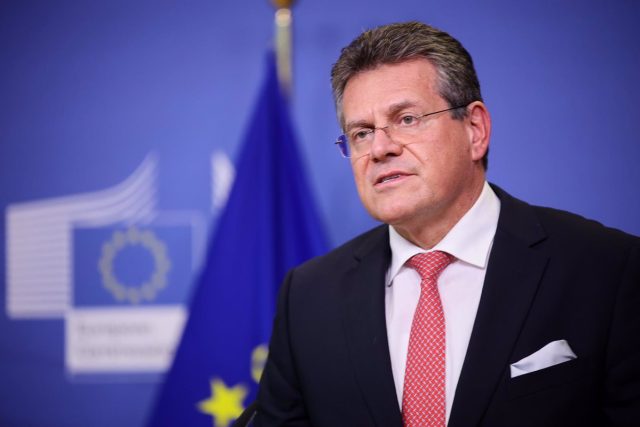 The Vice President of the European Commission responsible for the United Kingdom, Maros Sefcovic, has asked London again this Monday to focus the talks on the search for practical solutions for compliance with the Irish protocol agreed after Brexit and that the British are reluctant to apply, while warning of the “urgency” to unblock the situation.

“I am not in favor of establishing artificial deadlines but I will act with a sense of urgency,” Sefcovic said in an appearance before the press in which he did not admit questions, after meeting in Brussels with the British Foreign Minister, Liz Truss.

The European Union offered last October to relax a large part of the customs controls and other flexibilities on the conditions agreed with respect to the passage of goods arriving in Northern Ireland from the rest of the United Kingdom, a surveillance agreed upon during the Brexit negotiations to avoid going back to a physical border in Ulster.

Read:  Israel's military says it has "moral obligation" to prepare a response against Iran

In this framework, Brussels insists on appealing to the political will of the United Kingdom to move towards an agreement that relaxes the controls but also guarantees the necessary safeguards to protect the single market, but London insists that they are not enough.

“With political will, our discussions could lead to a proper agreement on durable solutions that would immediately and significantly help operators on the ground,” said Sefcovic, who appeared before the media without Truss’s company.

“In a couple of days it will be two years since Brexit. And I continue to believe that it is in our shared interest to rebuild trust and work closely together, especially in a world where democracy is increasingly under pressure from many sides,” the community vice president has riveted.

Sefcovic and Truss, who have met in the European capital after a week of contacts between their negotiating teams, have issued a brief joint statement to record the “constructive” atmosphere of their meeting and express the shared will to achieve a result ” positive”.

The two heads of the EU-UK negotiations will meet again at the end of next week to take stock again, before the EU-UK Joint Committee is formally convened in February.