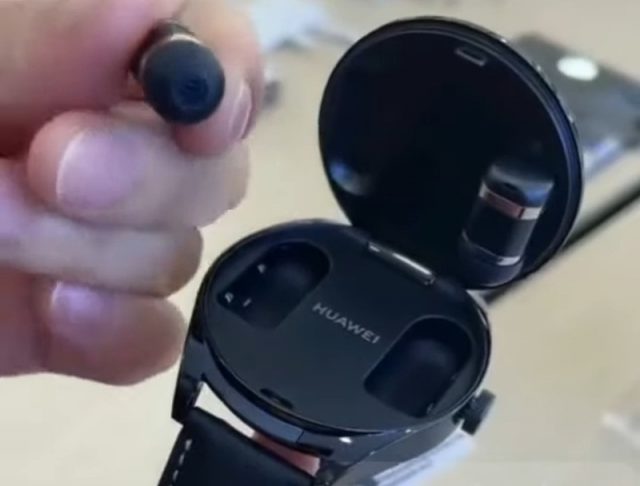 If there’s one product category Huawei seems to excel at, it’s smartwatches. Not only are its models popular with fans, but the company is constantly innovating in this area. After a “medical” model that can take users’ blood pressure, Huawei is preparing to launch a model called Huawei Watch Buds, which can house a pair of true wireless headphones.

The watch is due to be officially announced in China on December 2, but there’s already a clip on the QSQ Technology YouTube channel demonstrating its new capability.

On the outside, it looks like a regular Huawei Watch GT, but a little thicker. That’s because its screen is mounted on a hinged cover, which can be lifted off. Below the screen, two true wireless earphones are revealed to be stored, with a very compact design. These are bonded with magnetic contacts to the screen cover, and two cutouts can be seen at the bottom, providing the necessary place to accommodate the headphones.

The idea is very practical, allowing users not to have to carry yet another device in their pocket. Also, the headphones and watch can be charged together, so you don’t have to charge two things at once. And the fact that they’re permanently housed in the watch, and the watch is always attached to the hand with a strap, there’s no risk of losing the headphones, or their case, or the headphones with the case. When you’re not using them, you put them back in the watch and everything is permanently secure.

The only downside would be that the range will definitely be affected. Either the Huawei Watch Buds has a smaller battery to make room for the headphones under the screen, or it has a battery as big as before, but the battery life will be low, as the watch will be constantly powering the headphones as well. Also, the small size of the earphones suggests they won’t have room for a very large battery or for an overly powerful microphone.

Read:  Nokia 5710 XpressAudio is a mobile phone with T9 keyboard and wireless headset in a dedicated slot

Last but not least, we don’t know if the watch will be as well equipped with sensors as Huawei Watch GT models, which now include pulse sensor, pulse oximeter, skin temperature sensor, EKG and motion sensors for sports activities.

We’ll find out the full details about Huawei Watch Buds soon after the official announcement. However, the company isn’t in its first effort of this kind. Several years ago, Huawei was selling TalkBand models, fitness wristbands that also housed Bluetooth handsfree.