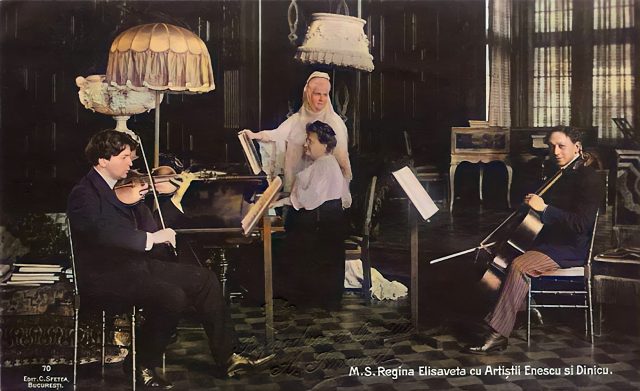 He was born on Sfintilor Street at number 41, on April 3, 1889, in the Scaune lute district and became one of the most appreciated lutenists in Romania. Names like Enescu, Tony Bulandra and even the “prince of lute players”, the Hungarian Lacz Laczi, fell in love with Grigoraș Dinicu’s violin.

Alexandru Vlahuță said that “whoever listens to Grigoras’ violin hears and sees music at the same time”.

“The heifer of the heifers”, where the mare has gone to the grave

The shabby house in which Grigoras Dinicu was born was located in the “junghinoș heaven”, as the neighborhood of the Scaune lute-players was then called. It is said that the “nickname” of the neighbourhood was given by an officer after his mare broke its leg after hitting a pothole.

Grigoras was born into a family with deep roots in music. His father, Ionică Dinicu, received applause on stages in Bucharest, Paris and Moscow. Grigoras’s grandfather on his mother’s side, the famous naist Angheluș Dinicu, and his uncle, the cellist Dimitrie Dinicu, a graduate of the Vienna Academy of Music and conductor of the Symphony Orchestra of the Ministry of Public Instruction.

His mother ran the family café, opened in the Scaune slum, where she sold food, beer by the bottle and mititei (small meatballs) as only Iordache’s on Covaci Street could.

The chronicles of the time tell us that Scaune was a “slum situated on the outskirts of the city, on either side of Bucharest, the river where the lute players’ wives washed their children full of mange and lice, with ulicio alleys full of bushy trees, and in the lime-plastered adobe houses, with curtains of ivy on the eaves and tall grass at the foundations, the lute players lived like one big family”.

Without surprising anyone because of the music that “haunted” the family, Grigoraș Dinicu ends up in the first years of school to sing with the other children of lîutari in the choir of the Church “Scaunele Vechile”.

He approaches the violin with Moș Zamfir, his first teacher in the slum. From him Grigoraș learns to play scores such as Doina Haiducului, Lume, Lume soro lume, Arde foc în București and Ciocârlia.

He was enrolled at the Conservatory of Music in Bucharest in 1902, even though Moș Zamfir was against it saying:

“Music is a different story. You can’t love it without a little mystery. If you put it on notes and blindly hold their ornament, then you play only what you see on paper, not what your heart tells you. You’ll ruin his hearing and feeling if you give him to the Conservatory. Man is born with nature’s gift of wit. A little ear, a little mind and craft, and the good lute player is ready.”

He manages to get himself expelled from the Conservatory after being caught by his teachers performing in pantomime shows to make a few bucks to support his family. But the same teacher who expels him trains him privately.

Read:  The Last of Us, between game and series: what are the biggest differences

“And when the bow slipped on the string, I cried too”

In 1913 he took a job at the “Enescu” restaurant, where great music lovers met. Among them were such personalities as George Enescu, Victor Eftimiu and Tony Bulandra. He would spend the next 22 years of his life here.

Through politician Victor Fiotti, he arrives in Budapest where he meets the “prince of the lute players”, Lacz Laczi.

After listening to Dinicu, Lacz Laczi says: “If I am the prince of the lute players, this Romanian seems to be a real king of them”.

He took up George Enescu’s model, and during the First World War he played in hospitals where wounded from the front were treated.

“We thus formed an artistic team with which throughout the war we played at the front and in the towns around the front for charities. I sang a lot in hospitals at the bedside of the wounded, here I sang with all my heart. And when the bow slipped on the strings, I cried too.”

After the war he sang with his band on stages in Monte Carlo, Paris, London, Austria, Poland, Germany and the USA.

Georges Boulanger, real name Ghiță Bulencea, with whom he had met in the past, brings Dinicu to the Parisian world. Here he is declared the greatest singer of popular and café-concert music.

Read:  Dacia Duster disappears, following Renault's decision, from the most promising market in the world. Where the famous Mioveni model will no longer be sold

From the slums to the stage of the Romanian Athenaeum

He returned to the country in 1932, and spent the next five years as a soloist on the stage of the Romanian Athenaeum.

In the company of the Bucharest Philharmonic he performs violin concertos by Bartholdy, Beethoven, Brahms, Bruch.

In 1939 he went to New York with his band, Fănică Luca and Maria Tănase, for the World’s Fair, and for four months he also played in Jean Filipescu’s restaurant, where names such as Marlene Dietrich, Errol Flynn and Miriam Hopkins came to listen to him.

After his return to the country, the first Radio Bucharest broadcast for America took place, at the initiative of Dimitrie Gusti. Thus, the programme of February 12, 1939 was heard in about 400 radio stations around the world and included: the Radio Orchestra, the Carmen choir, the Grigoraș Dinicu taraful, soloists of the Romanian Opera and Maria Tănase, together with the greeting message pronounced by Carol II.

“Last Sunday’s broadcast constitutes, without exaggeration, an epochal event (…) It is worth mentioning the exceptional quality of the musical programme broadcast during the Romanian Opera. The choice of folk songs and musical performers shows remarkable competence. We have been offered a selection of small juvaeruri: the best and most characteristic of this land. The international public had the opportunity to understand the Romanian soul by listening to its songs of joy and mourning, of duioșie”, wrote the magazine “Radio Adevărul” on 19 February 1939.

Grigoraș Dinicu’s undeniable talent disappeared in 1947, at the same time as the onset of an incurable disease – larynx cancer. He underwent surgery, but was no longer allowed to speak and had to communicate with others through writing.

He returns to the stage in various bands as a “second”, although his former technique has disappeared.

The disease recurs and another operation is needed, but this time the doctors can do nothing. Grigoras Dinicu died on March 27, 1949.

The violin on which Dinicu had played all over the world was to resound for the last time for him on his last road, the honour of playing going to Ion Voicu. Except that the crowds pouring into the alleys of the “Reanimation” cemetery almost crushed him, the artist barely managing to save the violin.