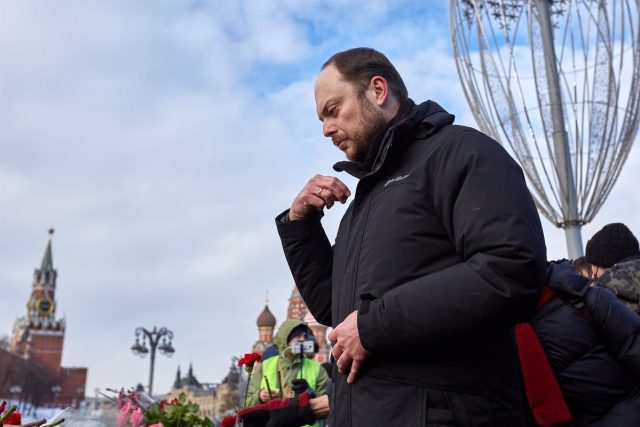 The NGO Human Right Watch (HRW) on Monday condemned the alleged false accusation against Russian opposition politician Vladimir Kara Murza, and urged the Kremlin to release him immediately and drop all charges against him.

The organization has called Kara Murza’s indictment in a statement a threat to keep the Russian public from engaging in dissent, after he was indicted for allegedly spreading false news about the Russian Armed Forces and for his public criticism of Russia’s invasion of Ukraine.

“The new charge against Kara Murza is a blatant attempt to instill more fear among Russians and civil society, in order to dissuade them from mobilizing against the Kremlin and its war against Ukraine,” Williamson added.

The arrest and prosecution of Kara Murza is part of “accelerated efforts” by the Russian authorities to punish and silence all dissidents, the NGO said.

In April, police detained the opposition politician on administrative grounds near his Moscow home, falsely claiming that he had disobeyed police orders. While in detention, authorities filed criminal charges for spreading “deliberately false information” about the Russian military for a speech he delivered to the Arizona House of Representatives in the United States in March.

During his speech, he said that “everyone sees what Putin’s regime is doing in Ukraine: the cluster bombs in residential areas, the shelling of maternity wards and hospitals and schools,” referring to these acts as war crimes.

The indictment claims that Kara Murza’s speech was guided by “political hatred” against the Russian authorities, an aggravating circumstance, for which she now faces up to 10 years in prison on these charges.

Under Russia’s repressive “undesirables” laws, the prosecutor’s office can designate as “undesirable” any foreign or international organization that allegedly undermines Russia’s security, defense, or constitutional order.

So far in 2022, Russian courts have sentenced two activists to several years in prison on “undesirable” charges.

The politician’s lawyer, Vadim Prokhorov, has detailed to Human Rights Watch that he believes the authorities have brought these trumped-up charges against Kara Murza “to show that they can do whatever they want.”

Kara Murza has been an outspoken critic of the Kremlin for years and was a close friend of murdered Russian opposition politician Boris Nemtsov. He survived two near-fatal poisonings, in 2015 and 2017, which ‘Bellingcat’ investigative journalists reported would likely have been orchestrated by the Russian Federal Security Service (FSB).

“The trumped-up charges against Kara Murza are purely politically motivated, and he should be released immediately and unconditionally, as should many other Russians prosecuted on outrageous charges of ‘fake news,’ ‘undesirables,’ and the like,” Williamson has urged.

“Russian authorities must stop abusing and manipulating the justice system in their desperate efforts to crack down on dissent and opposition,” he has added.