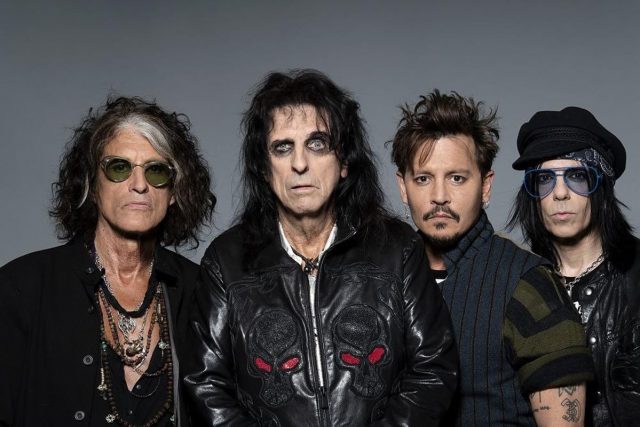 Hollywood Vampires is a band whose foundation was laid by Alice Cooper, Johnny Depp and Joe Perry. The aim of the band, in itself, is to pay tribute to all the artists in the rock scene who, at some point, died due to the excesses of their lives.

The band’s name is taken from the club “The Hollywood Vampires”, founded by Alice Cooper in his youth and to which various singers such as John Lennon, Ringo Starr, Keith Moon and Micky Dolenz belonged.

The band has released two albums to date. These have been “helped out” by the likes of Paul McCartney, Dave Grohl, Joe Walsh and Christopher Lee.

The band has now added a new member (either permanent or temporary) in Tommy Henriksen, bassist for Alice Cooper. Over the years, The Hollywood Vampires have performed with Duff McKagan and Matt Sorum of Guns n’ Roses, Brad Whitford (Aerosmith) and Robert DeLeo (Stone Temple Pilots).

“It’s been three years since the Vampires have toured. I can’t wait to get back on stage with the guys; I love being in this band. My band is great, but playing with the Vampires is a whole different story,” said Alice Cooper.

Where to get tickets and how much they cost

Tickets will go on sale on November 4 through the iabilet network and will be priced as follows:

Also, only 500 VIP tickets will be on sale in the high grandstand for 699 lei.