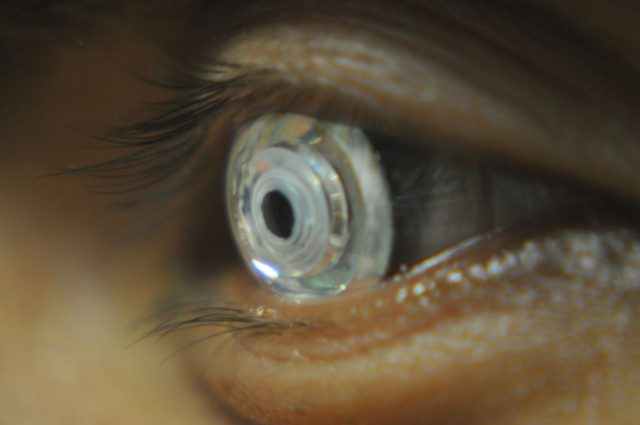 For many years, the subject of rumors, contact lenses that discreetly serve users visual details that no one else can perceive, are about to become commercial products, endorsed by Samsung and Google.

As an alternative to the smart glasses designed by Meta engineers (Mark Zuckerberg’s company), contact lenses with augmented reality features could be the real successor to the “trivial” smartphone.

We already know that almost no one wants to wear glasses on their face all day, the already obsolete fashion of 3D glasses proving that you can’t undermine the comfort of users, convincing them to wear a device all day long that offers the functionality (even improved) of a gadget on who can simply look at it. But if you can achieve the same result, getting rid of your smartphone and glasses?

Not exactly new, the concept has long been held in place by the absence of technology capable of translating it into reality. Defying any expectations, industry sources show that Google and Samsung are preparing for the post-smartphone revolution, which would be based not on glasses, but on smart contact lenses that you will wear with minimal effort, all day long.

Read:  Logitech G announces G502 X in three variants, the next generation of one of the most popular gaming headsets

Both companies are laying the groundwork for smart contact lenses, which have been in development for several years. Given the expertise in the segment of microprocessors, screens and consumer electronics, it would not be unthinkable for Samsung to be interested in this segment. In fact, the South Koreans already have a very successful precedent, becoming the company that dominates the folding phone market so far, an area in which other players have hesitated until the last moment to venture with all the resources.

The even better news would be that the future duo will be at least a trio, Sony adapting its own experience in the segment of camera sensors, according to the requirements of the new smart lens market.

Read:  Microsoft Ignite Spotlight on Romania: a new name and a new perspective on digital transformation

Although it seems to be based on greed, in the sense of taking advantage of and possibly grabbing, a new emerging market, the smart glasses of those from Google, Samsung and possibly Sony, have great chances to set the tone of the industry. Quite simply, the smartphone market is stagnating with no obvious solution, with the “rescue” offered by foldable phones seeming to offer nothing more than momentary fun. Thus, a major change is needed so that the industry focused on annual growth can maintain its current pace, it remains to be seen what long-term impact these measures will have.