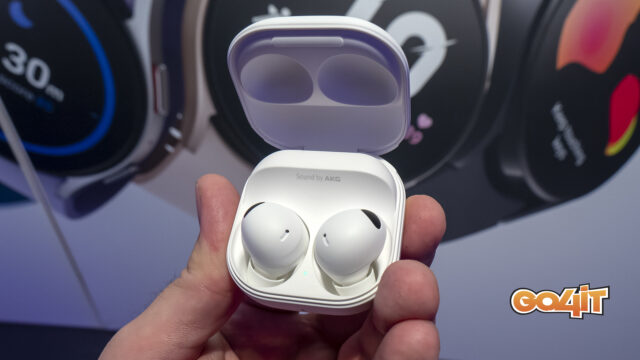 When we tested Samsung’s Galaxy Buds2 Pro, we mentioned that in order to take advantage of all the advanced features of the headphones, they’ll need to be used with a Galaxy phone, preferably from the S or Fold series, which benefit from advanced codecs over Bluetooth. This means that it doesn’t make much sense to buy these headsets for other phones, made by other companies, but also that the experience on Samsung models is superior to other “universal” headsets. Samsung has released a new software update for the Galaxy Buds2 Pro that adds a new video recording feature, again exclusive to Samsung phones.

The newest update for Galaxy Buds2 Pro, which is made via Samsung’s dedicated wearables app, allows you to capture sound in a natural way when recording video with your phone. Basically, voice microphones can be used alongside those used for ambient noise cancellation to capture sound 360 degrees around the user. This way, you can have ‘3D’ sound in videos recorded with your phone, giving viewers the feeling that they are in the place when they play the video with a pair of headphones or on a high-performance sound system.

Read:  Netflix will charge each "house" on subscription accounts used by multiple users

The new sound capture feature uses the Bluetooth LE Audio protocol, which enables binaural sound recording. The only Samsung smartphone models with support for this standard are currently the Galaxy Z Flip4 and Fold4, but the Galaxy S23 will surely integrate similar technology.

The update will come “progressively” to users’ headsets, so if you haven’t already received it, you’ll definitely get it in the next few days. The Galaxy Watch4 and Watch5 series watches are also getting new remote camera control features on the phone. This allows the Watch4 Classic to rotate the bezel around the screen for zooming. The other models use touch for the same function.