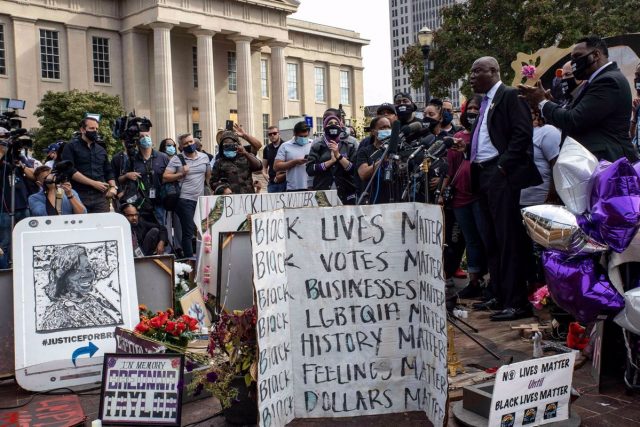 Four on-duty and retired Louisville Police officers, in the US state of Kentucky, have been charged with civil rights violations and unconstitutional abuse of force in the first federal indictments for the March 2020 death of healthcare worker Breonna Taylor in a wrongful raid and, according to the indictment, replete with negligence covered up by police.

So far no officer has been charged with murder in the death of Taylor, who was shot at least five times when several plainclothes officers stormed the home she shared with her boyfriend, Kenneth Walker, who mistook the officers for intruders and shot one of them in the leg.

The officers’ shooting response ended the life of the 26-year-old black female health care worker in the triggering of new protests against police violence and institutional racism in the United States.

Walker has been cleared of any charges after a court found that he acted within reasonable limits in compliance with the state’s “Defend Your Site” law, which allows the use of lethal force in trespassing cases.

Thus, former Detective Joshua Jaynes, 40, Detective Kelly Goodlett and Sergeant Kyle Meany, 35, have been charged first with filing a false affidavit to search Taylor’s home prior to the raid, and second with conspiring together to cover up the falsity of the aforementioned affidavit.

Likewise, former detective Brett Hankison, who opened fire from outside the house without a clear line of fire, has been charged with “using excessive force in an unconstitutional manner by firing his service weapon through opaque material,” which also endangered neighbors in the apartment, U.S. Attorney Merrick Garland has explained.

Jaynes, Meany and Goodlett, for their part “applied for a warrant to search the house knowing that they lacked probable cause to search. The defendants knew that the affidavit in support of that warrant contained false and misleading information,” Garland added in his announcement of the indictment.

The attorney general specifically referred to Jaynes and Goodlett, whom he accused of lying in justifying the raid on the fact that the target of a drug trafficking operation had received packages at Taylor’s address.

“The two defendants knew that this was not true,” said Garland, who pointed out that “the agents who carried out the search warrant did not participate in the drafting of the warrant and did not know that it contained false information.”

Read:  Ukraine denounces new Russian attacks on kyiv while Guterres is in the capital

However, in January 2021, the Police Department fired Jaynes and his colleague Myles Cosgrove, the latter responsible according to the investigation for the shooting that ended Taylor’s life, for abuse of lethal force by discharging 16 shots without activating the body camera that would have allowed the entire event to be recorded.

The attorney general recalled that the charges announced this past Thursday are separate from the ongoing investigation of local law enforcement and the Louisville Police Department, announced on April 26.