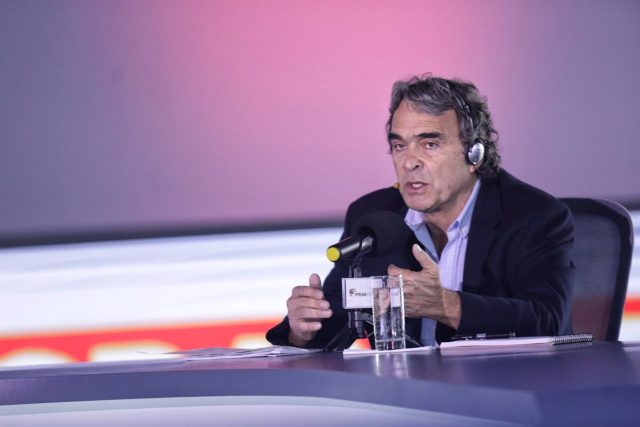 Petro regrets Fajardo’s decision and assures that, otherwise, he would vote for him “without hesitation”

The former commissioner of the Colombian peace process, Humberto de la Calle, calls for a minimum pact between both candidates

The former centrist candidate for the presidential elections in Colombia, Sergio Fajardo, has reiterated that he will not vote for the candidate of the Historical Pact, Gustavo Petro, in the second round of the elections –scheduled for June 19– despite not having reached an alliance with conservative candidate Rodolfo Hernández.

“I do not vote for Gustavo Petro (…) And I am going to put it in writing, I am preparing a document to explain why. When I feel comfortable I will publish it,” Fajardo said in an interview for the Colombian station BLU Radio.

For his part, Petro has responded to Fajardo’s statements and has assured that if the situation were reversed and the second round of the elections confronted the centrist and Hernández, he would support Fajardo “without hesitation.”

The one who until now was the main favorite in the polls has shown his conviction that Fajardo’s decision is “autonomous”, although he has lamented before the microphones of the radio station La FM that in a political scenario like the one that Colombia is experiencing today of today, “the personal ego cannot be above the general well-being”.

Read:  Trudeau believes it is "absolutely correct" to describe Russian actions in Ukraine as "genocide"

Hernández and Fajardo terminated this Sunday their aspirations to forge an alliance for the second round of the elections. According to the conservative candidate, Fajardo was looking to “make a change to the government plan,” and the meetings were a “courtesy” and had no real intention of reaching a pragmatic agreement.

In fact, these words have not sat well with Fajardo himself, who has called Hernández’s attitude when it comes to cutting off contacts “impolite” and has ruled out that he would attend these meetings “demanding things.”

Already on Sunday, the progressive Petro described Hernández’s rejection as “humiliation” and argued that Hernández “prefers ‘uribism’ than the political center”, alluding to the most conservative sector of the Colombian political scene and referring to former president Álvaro Uribe.

“URGENT AGREEMENT” BETWEEN PETRO AND HERNÁNDEZ

On the other hand, the senator and former commissioner of the Colombian peace process, Humberto de la Calle, has called for Petro and Hernández to reach an “urgent agreement” of six points in which a series of commitments between both candidates are established. and that it be applied regardless of the winner of the second round.

Read:  López Obrador threatens not to attend the Summit of the Americas if the US does not invite all countries

“Whoever wins the Presidency must advance the change mandate established by a majority in the first round. For this reason, from now on, they must publicly commit themselves to an agreement on fundamental issues,” said De la Calle.

Among these points stands out the acceptance of the results of the elections, respect for the Colombian Constitution, the need to implement an open economic model and without prejudice to the intervention of the State and guarantee that the future Government can maneuver freely but always within constitutional channels.

Petro and Hernández will face each other on June 19 in the second round of the Colombian presidential elections after being the candidates with the most support in the first round: Petro added 40.34 percent of the vote and Hernández gave the surprise by unseating Federico ‘Fico’ Gutiérrez after achieving 28.17 percent of the ballots.

The latest poll published this Sunday places Hernández in the lead with 46.4 percent support compared to 43.3 percent for Petro. However, a study published on Saturday by the magazine ‘Semana’ places Petro ahead (44.9 percent), while Hernandez would achieve 41 percent support.