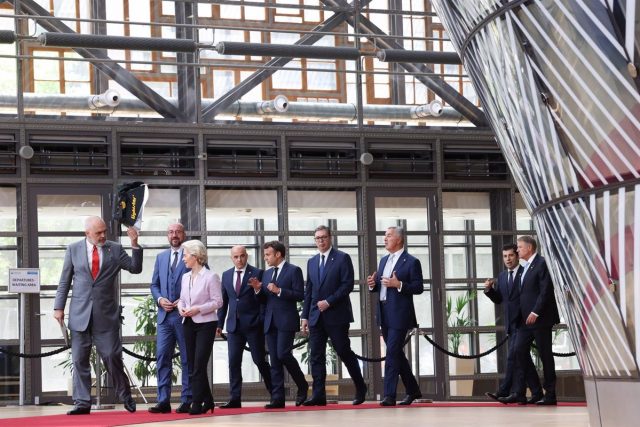 More than forty European leaders, including the EU-27, the United Kingdom, Ukraine and Turkey, will meet this Thursday in Prague with the challenge of consolidating a new ‘European Political Community’ devised from the European Union with the ambition of strengthening alliances between neighboring countries in the face of the geopolitical offensive that Russia initiated with the invasion of Ukraine but also to seek solutions and synergies in the face of the energy crisis.

The objective therefore is to create a platform for dialogue that will serve to “ensure peace and stability” on the continent, European sources indicated, and also to show an image of “unity and solidarity” in a continent with its own tensions, such as the frequent migratory conflicts with Turkey, the disenchantment of the Western Balkans due to the slowness of its EU accession process or the rupture of the United Kingdom with its EU past.

Thus, the leaders will divide the interventions in several round tables of discussion on cooperation in security and migration and economy and energy, but the summit will reserve a good part of its time to schedule bilateral and small-format meetings between the attendees to promote understandings.

Although the idea of this new community came from the president of France, Emmanuel Macron, last May and was later blessed by the rest of the 27, from the European Union they are keen to stress that it is not an integration project parallel to the enlargement, but an “intergovernmental process” in which all have the same weight.

In this first edition, the Czech presidency of the EU and the Council itself assume the organization as “facilitators” of the meeting, but the community bloc insists that it is neither responsible for nor presides over the summit of a community, whose future projects, presidencies, format and calendar are yet to be decided by consensus.

In the absence of the leaders defining the functioning of the new dialogue platform, the majority consensus points to there being two annual appointments with rotation between EU and non-EU countries to host them, European sources have indicated.

The informal nature of this first meeting means that the delegations do not plan to publish a written declaration signed by all the leaders, although they do plan to send out messages stressing the “spirit of unity”, the need to promote dialogue on key issues of common interest and to identify projects to strengthen cooperation in areas such as energy, security and migration.

The meeting, which precedes the informal summit of European leaders on Friday, is structured around an opening session in which all the leaders will participate, followed by four round tables in which they will be divided into groups.

The opening session will be open and the Czech Prime Minister, Petr Fiala, as host, is scheduled to speak, followed by four countries outside the European Union but of great relevance in the current context to highlight the “political weight” of this meeting: Norway, key to energy supply after the break with Russia; Albania, the United Kingdom and Ukraine.

In the case of Ukraine, President Volodimir Zelenski will intervene by videoconference, but the country will also have a physical presence at the new European forum with the attendance of Prime Minister Denis Shmigal. Only one of the 44 invited delegations will be absent, that of the Prime Minister of Denmark, Mette Frederiksen, who is due to appear before her national parliament.

As for the round tables, two are planned on peace and security and another two on energy, climate and the economic situation. Moncloa has announced that the President of the Government, Pedro Sánchez, will speak at one of the latter two, although it is not yet known which other leaders will be with him.

At the end of the working tables, the leaders of the EU and the rest of the invited countries will have a brief period of time for bilateral meetings. Sánchez will meet with some of them, although for now Moncloa has not specified with which ones, since the agenda is still to be finalized.

To conclude, the more than 40 leaders will hold a dinner at the Prague Castle, the framework chosen for this new initiative to see the light of day. In addition to the 27 EU member states, the six Balkan countries (Albania, North Macedonia, Kosovo, Serbia, Bosnia and Montenegro), as well as the four EFTA countries (Norway, Switzerland, Iceland and Liechtenstein) and Ukraine and Moldova, which already have candidate status, plus Georgia, Armenia and Azerbaijan, have been invited to the meeting.

Read:  Polisario regrets that Spain has ignored international law in its turnaround on Western Sahara

Sanchez will again coincide with a representative of Kosovo, a country whose independence Spain still does not recognize, as do four other member states–Greece, Cyprus, Romania and Slovakia. Government sources have precisely stressed that the leaders of these EU countries will also attend the meeting, as will Serbia, the country from which Kosovo unilaterally proclaimed its independence in 2008.

On the other hand, the presence of the new British Prime Minister, Liz Truss, is particularly relevant given the tensions that persist with the bloc in the wake of Brexit and also because of her weight at the European and international level. When the idea was initially mooted, the still foreign minister was skeptical but finally the British government has deemed it worthwhile to see first-hand what it consists of and to be part of what it may become from the very first moment.

The presence of Turkish President Recep Tayyip Erdogan is also important in the current context, as he has become a key player in seeking a way out of the conflict in Ukraine and also in securing the deal that allowed the export of the blocked Ukrainian grain.

Turkey also maintains a complicated relationship with the EU, of which it has been a candidate country since 1999, and in particular with its neighbors, Greece and Cyprus, but it is considered a fundamental country both in terms of security — it is a member of NATO — and also in terms of migration.

The fact that the first meeting of the ‘European Political Community’ comes barely a week after Russian President Vladimir Putin announced a partial mobilization in Russia and threatened the use of nuclear weapons, as well as after the annexation of four Ukrainian regions resulting from referendums that the bulk of the international community has not legitimized, will certainly focus the debate.

The consequences of the war in Ukraine, both from an energy and economic point of view, will be the other major focus of discussion for the assembled leaders, at a time when both the EU and countries outside the bloc are trying to seek sources of energy supply other than Russia and to alleviate as far as possible the impact that the conflict is having on their economies and in particular on their citizens.