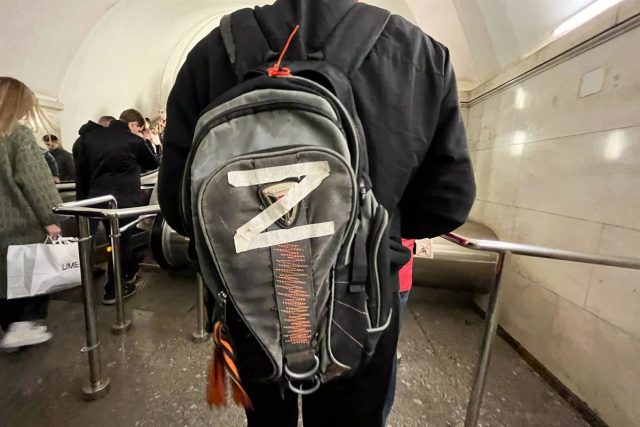 File – A man with a backpack with a ‘Z’ enters the metro in Moscow, the Russian capital. – -/dpa – File

The Estonian Parliament has approved this Thursday a law that, among other things, prohibits the display of symbols considered “hostile”, such as the ribbon of Saint George or the letter ‘Z’, used to support the Russian invasion of Ukraine.

Specifically, the law prohibits displaying in a manner that “supports” or “justifies” acts of aggression, genocide, crimes against humanity, or war crimes. Violating the law is punishable by an economic fine of 1,200 euros, which rises to 32,000 if the act is committed by a legal person.

In addition, the law makes it a crime to join foreign Armed Forces or other armed entities to engage in or prepare for acts of aggression and to “knowingly” directly support an act of aggression, including financing.

This crime is punishable by up to five years in prison, while it carries an economic sanction if the crime is committed by a legal person, according to information collected by the Estonian newspaper ‘Postimees’.

The ribbon of Saint George – any ribbon with the colors orange and black – represents the triumph of the Soviet Union against Nazism since 2005, although it refers to the Russia of the czars. It has been popularized by supporters of President Vladimir Putin, especially after the Russian annexation of Crimea in 2014.

In the case of the letters ‘Z’ and ‘V’, it is common to see them on Russian military vehicles since the invasion of Ukraine began. The ‘Z’ stands for “za pobedu”, which means “for victory”, while the ‘V’ stands for the phrase “sila v pravde”, “strength and truth”.

On the other hand, the Estonian Parliament has unanimously approved the adoption of a resolution accusing Russia of committing “genocide” and war crimes against the Russian people, in a vote in which several Ukrainian legislators were present.

Specifically, the resolution describes “the systematic and massive war crimes (…) committed against Ukraine by the Russian Armed Forces” and mentions murder, torture and rape of civilians, according to the DPA news agency.

“These crimes are ideologically incited by Russian politics, by the military leadership and by its propagandistic authorities,” reads the text.

This resolution comes on the same day that the Latvian Parliament has adopted another resolution accusing Russia of committing “genocide” against the Ukrainian people, while calling on the Member States of the European Union (EU) to impose a embargo on Russian oil and gas.