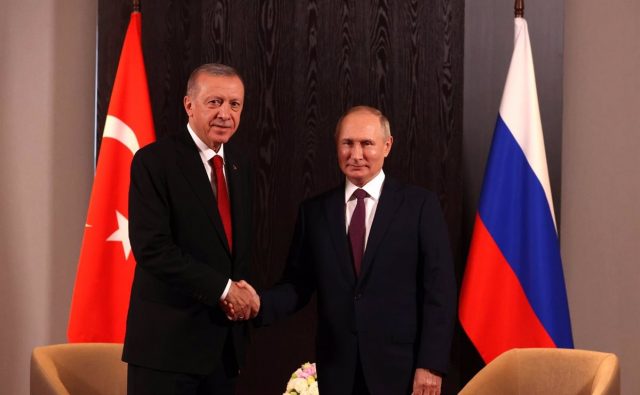 Turkish President Recep Tayyip Erdogan has called on his Russian counterpart, Vladimir Putin, to give “a second chance” to peace negotiations with Ukraine, just hours before Moscow formalizes the accession to Russia of four Ukrainian regions occupied as part of the invasion.

The Turkish Presidential Communications Directorate said in a statement that the two leaders held a telephone conversation in which Erdogan reiterated that Ankara “is ready to assume a facilitating role” in contacts between Moscow and Kiev.

He has also outlined that Erdogan has shown his “satisfaction” with the recent exchange of prisoners between the two countries, as well as with the functioning of the Istanbul Agreement for the resumption of grain exports through Ukrainian ports. The Turkish president has also advocated “extending the mechanism”, which expires in November.

In this regard, Erdogan has stated that this extension “would be to our mutual benefit” and emphasized that “work is underway for the uninterrupted export of Russian fertilizer and grain,” a demand of Moscow that would be contemplated as a counterpart to the opening of ports.

Finally, the president also outlined the need to “reduce tensions to pave the way for favorable developments” and said that he expects “steps” from Moscow regarding the accession of the self-proclaimed republics of Donetsk and Lugansk, as well as the regions of Kherson and Zaporiyia, to “facilitate the process.”

Erdogan has thus made a veiled request to Putin not to proceed to annex these territories, after having said that the results of the referendums and the accession of these regions to Russia would not be recognized, in line with the position maintained by the international community.