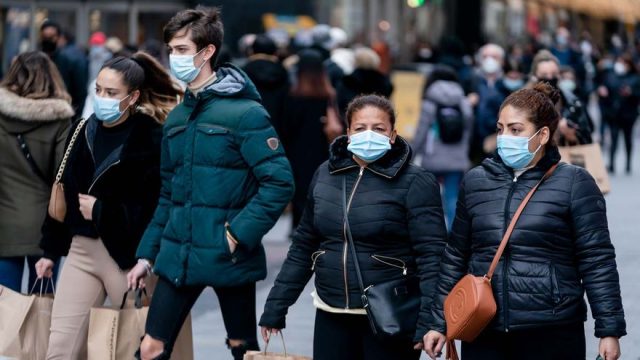 The Madrid employers CEIM asks that the quarantines for asymptomatic covid-19 patients reduced from seven to four days, as in Switzerland, or to five days, as in the United States, before the “avalanche” of sick leave caused by the omicron variant that are wreaking “havoc” on businesses.

This is what Miguel Garrido, president of CEIM, puts it in an interview with Efe in which he states that Mutuals are empowered to facilitate cancellations and registrations of workers with coronavirus in order to prevent collapse primary care.

He defends that casualties are not automatic, with a simple phone call to communicate the result of a test, which “has never been like this” and, after pointing out that in Navarra from this week the material verification of the patient is once again required, bet to return to normal “as soon as possible” because the situation is “unsustainable” not only for economic reasons, but because companies cannot provide their services.

“In the industry of cleaning have a serious problem because it is very easy to access the low and with very little rigor. I don’t know if people will misuse it or not, but you can use it however you want. You just have to call and say that you have tested positive in a test”, explains the president of CEIM.

The sixth wave is having a “widespread” impact and it is affecting “everyone in a transversal way”, since the cases have skyrocketed like never before and, although they generally have little impact on people’s health, they do require a minimum seven-day quarantine , although the average is 15 days off, according to Garrido.

It specifies that in those companies where teleworking is implemented, most of the employees they do not request discharge because they have no symptoms or these are very mild and allow them to continue working, but the contagions are having a great impact where a face-to-face activity, such as coach drivers, in cleaning services, in restaurants and in shops, among many other sectors, where casualties are “many and long-lasting, they overlap with each other and end up collapsing the activity of companies”.

Read:  What animals transmit monkeypox in its western variant?

In some cases, he adds, casualties can be covered by Temporary Employment Agencies (ETT), which are having high demand for workers to cover these services, but there are cases where it is not possible.

“In the assembly lines, where one’s work depends on what the previous one does, the moment two or three people fall ill, the activity of the entire factory stops,” says Garrido.

The situation is “very difficult to manage” because the lack of personnel to cover casualties in cleaning or security contracts causes contracts to be breached and exposes the successful bidders to penalties.

He gives as an example the case of a cleaning company, which cannot meet the commitment to serve a Ministry or a company with twenty-five workers a day because he has five, seven or ten off.

Therefore, in “a situation of emergency“, Just as the rules to cause cancellation have been relaxed, he asks for understanding, above all, from the administrations, but also from private companies that have contracts for the provision of services to understand that commitments cannot be fulfilled because it is “materially impossible “and relax the penalties.

The effect of the sixth wave is being “devastating”, in the words of the CEIM president, who points out that the casualty data for December are “obsolete” because the situation has skyrocketed in the first days of January with the return to schools, when, according to the Community of Madrid, in the first week 10% of the students did not go to class.

Read:  The strange cases of childhood hepatitis detected in Spain: symptoms and causes

“Who takes care of these children?” asks Garrido before lamenting “the lack of control to check if people are really on sick leave or not, because simply calling and saying that you have tested positive is enough.”

The president of CEIM understands this “emergency solution” because the doctors could not be signing sick leave forms and stop treating sick people, but this situation has been going on for several weeks and it cannot be the “definitive” answer because there is no no control to verify that the casualties are “relevant”.

“If the pressure on primary care has been relieved, let the doctors of the public health system be the ones to discharge and, if that is not possible, let count on the mutuals that they are prepared from the first moment to be able to carry out this task”, claims Garrido.

In his opinion, the activation of the concession of discharge and discharge after seven days in the same act it is “an advance”, although “it is late” because previously the doctors gave the discharge with a simple call and, sometimes, they could not discharge it after seven days, so that the person could not return to work, even if they did not have any symptoms or any health problem.

For asymptomatic cases, he proposes that the quarantine not be for a week, but four or five days, in view of how the omicron variant has evolved, as long as from the epidemiological point of view this does not generate an increase in infections.

He underlines that the sixth wave “is penalizing activity, as seen in the traffic in Madrid, and taking into account that we have come from many months of falling activity, this may be the auction for many companies”