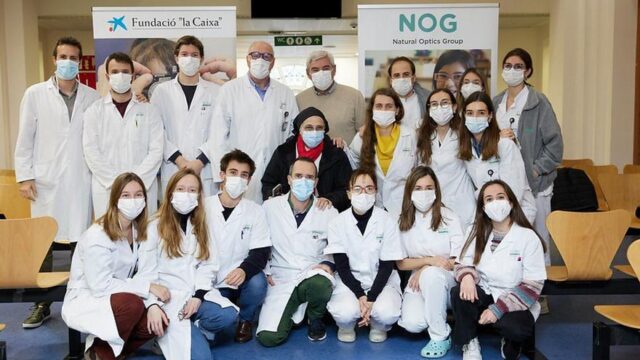 According to data from the American Academy of Ophthalmology mentioned this Monday by the ‘la Caixa’ Foundation in a press release, visual problems affect one in four school-age children and one 25% of the student population is susceptible to undetected problems such as nearsightedness, farsightedness, astigmatism or lazy eye.

The screenings were carried out by a team headed by the head of the Ophthalmology Service of the Hospital Clínic, Bernardo Sánchez-Dalmau, and nine ophthalmology specialists, five optometrists and administrative staff.

Read:  Metges de Catalunya delivers 54,000 signatures to Parliament and calls for a "radical" change to avoid the strike

After the review, they have offered. glasses to minors who need them, who have been able to choose and who have been provided with the appropriate lenses for their prescription, age and use.

The ophthalmologists at the Clínic have recalled that vision develops during the first six or seven years of life, therefore recommend that children should have a assessment of their vision when they enter school, around age four, and repeat the screening once a year.

‘#Invulnerables with vision’ was born in 2018 with the aim of “look after children’s visual health to ensure their comprehensive wellbeing.” and “provide fundamental support for their cognitive development”; since then, eight ophthalmological check-up days have been held in different centers in Catalonia.

Read:  In vitro fertilization cycles do not affect breast tumor type in some patients

According to the ‘la Caixa’ Foundation, the program promoted by Sister Lucia Caram and the same foundation. “fight against child poverty” and “works to undo the cycle of inherited poverty by promoting equality of opportunity.”

Since the ‘#Invulnerables’ program was launched. six years ago, has been attended to 1,516 families and 2,794 children.