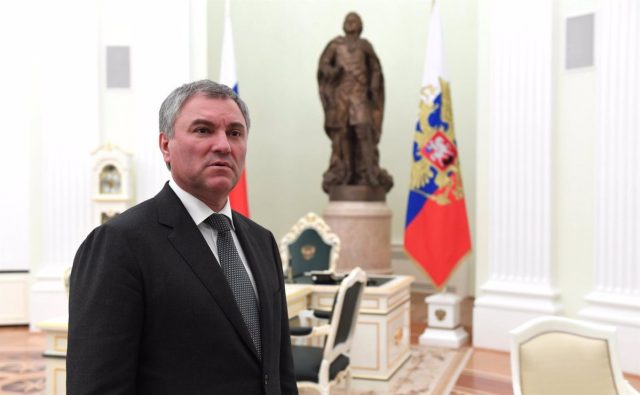 Russian State Duma Speaker Vyacheslav Volodin on Thursday called on “eligible” parliamentarians to enlist in the Army to participate in the war in Ukraine, after the country’s President Vladimir Putin decreed a “partial mobilization” on Wednesday.

“A day has passed since the decree of the president (…) on partial mobilization, which will help to solve the tasks of the special military operation,” he said in a message on Telegram in which he said that “not only Nazi armed formations fight against Russian soldiers and officers, but also NATO forces.”

“In Ukraine there are NATO trainers, NATO mercenaries, NATO equipment, weapons and ammunition. The line of contact is more than a thousand kilometers,” he pointed out, while defending that “it is necessary to increase the size of the Armed Forces” deployed in the neighboring country.

In this regard, he has stressed that the “partial mobilization” affects “those who have served in the Army and have combat experience,” before emphasizing that parliamentarians “who meet the requirements” should “help” through their “participation in the special military operation.”

“MPs have no armor,” Volodin said, stressing that “now is a time of challenges.” “Together we will overcome them. The safety of our citizens and the sovereignty of the country will be guaranteed,” he concluded.