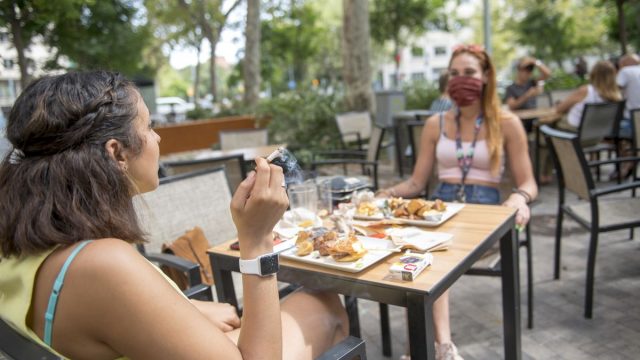 The Department of Health is preparing a law which shall declare smoke-free spaces and therefore no smoking, public spaces, such as public school entrances, bus shelters o terraces of establishments. Until now, smoking has been allowed in these spaces. In communities such as Balearic Islands, for example, smoking is prohibited on terraces: it was a ban that came with the covid-19 pandemic and was eventually maintained.

This is how the ‘conseller’ de Salut has explained it, Josep Maria Argimonon TV-3, where he specified that they are finishing the drafting of the regulation, that the Government could present it “in the next few weeks” and that it will then have to go through the parliamentary process. There is no date of entry into force yet.

For its part, starting in January, the following will be offered. nicotine replacement therapy will be offered free of charge. to people with incomes lower than 18,000 euros. Salut estimates that some 600,000 people who smoke and are at this threshold could benefit.

Read:  No covid-19 patient in the ICU of Hospital del Mar for the first time in 1,000 days

According to sources of Salut have confirmed to EL PERIÓDICO, the ‘conselleria’ is already working the regulation announced today by Argimon, but after it has to be taken to the Govern and, subsequently, it must pass through the Parlament. For this reason they do not know the exact date of entry into force of this law. “As of January 2023 what will be free of charge is the treatment for people with incomes below 18,000,” these sources point out. The rule provides for penalties.

Argimon has acknowledged that the reduction of people smoking stopped in 2017 and since then the figure has remained stable at approximately 24% of smokers in Catalonia. He also added that whenever any regulation declaring smoke-free spaces has been promoted, more people have stopped smoking and for this reason the ‘conselleria’ is working on a new one.

Read:  Catalonia detects 96 more cases of monkeypox and the total rises to 1,921 cases

The ‘conseller’ has explained that this is a law that can move Catalonia forward and that it will do so. He recognized that there must be a “transition period” so that this new reality could be accepted, but he recalled that smoking used to be done in places such as restaurants and now it would surely be unthinkable.

On the other hand, Argimon has detailed that smoking cessation treatments based on nicotine substitutes cost around 300 euros. By making it free of charge, the aim is to eliminate the economic obstacles for people with fewer resources.