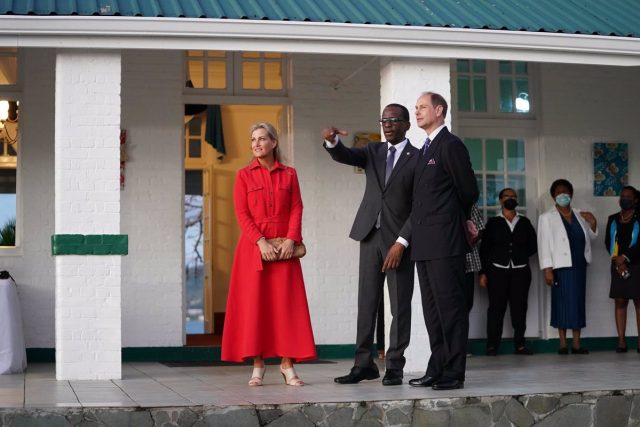 The Earl and Countess of Wessex, Eduardo and Sofia, have continued with the second leg of their tour of the Caribbean amid criticism for comments that some members of the Royal Family would have made about slavery.

With the aim of strengthening the image of the United Kingdom in the region, the couple has started a tour where they will visit Antigua and Barbuda, Granada, Saint Lucia and Saint Vincent and the Grenadines. In this last country, the couple received this Friday the second red carpet and the honor guard of their tour, where ‘scouts’, girl guides and cadets have waved the national flag during their reception.

But Eduardo and Sofía had received a warning from another Caribbean country to avoid “false sanctimoniousness” about slavery, after during the visit that the Duke and Duchess of Cambridge –carried out last March– to the Bahamas, Belize and Jamaica, some British media reminiscently mentioned the colonial past of these States.

“We heard the false sanctimoniousness of those who preceded you that these crimes are a stain on your history (…) For us, they are the source of genocide and deep and continuing international prejudice, injustice and racism,” he assured. the Antigua and Barbuda Reparations Support Commission in an open letter to the couple.

The Commission has called on British royals to respect the citizens of Antigua and Barbuda without repeating the mantra that has occurred in other Caribbean countries.

Despite the warning, the reception for the couple has been friendly. Before going up to a platform to observe a guard of honour, Edward received a greeting from the country’s president, Dame Susan Dougan, followed by the acting prime minister, Montgomery Daniel.

The couple is scheduled to hold separate engagements during part of their day trip to the island.

Sophie plans to visit a community college, where she will be received by the La Gracia dance company.

As part of her goal of championing the need for support and equality for blind and partially sighted people, the Countess will meet with representatives from two organisations, Persons With Disabilities and the Society Of And For The Blind. ). She will also meet with women’s groups to learn about her role in the community response to last year’s La Soufriere volcano eruption.

Meanwhile, Edward plans to visit the island’s national stadium, where he will meet athletes training for the Birmingham Commonwealth Games.

The Earl will also witness the end of a T10 women’s cricket match and meet some of the country’s netball and tennis teams.

Before leaving, Eduardo and Sofía will travel to the Prime Minister’s residence to meet with the acting Executive in its entirety.