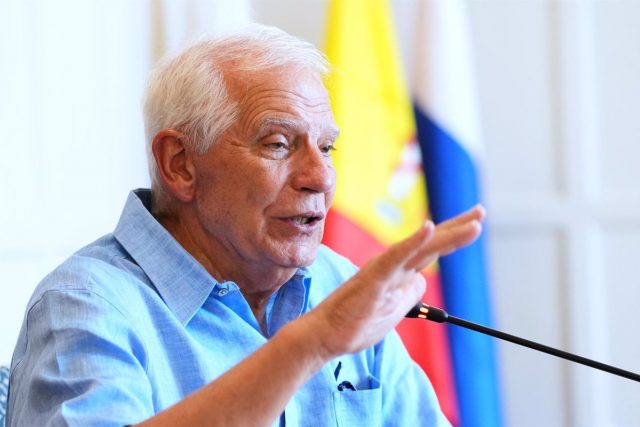 The High Representative of the European Union for Foreign Policy, Josep Borrell, has called on Wednesday for unity among the EU-27 to face the debate on restricting visas for Russian tourists, an issue that generates divisions among Member States.

“There are different positions and I will work to have unity and a common position. We cannot afford to be divided on this,” the head of EU diplomacy acknowledged in statements from Prague, Czech Republic, where foreign ministers are holding an informal meeting in which they will discuss the situation in Ukraine, the consequences of the war and the future relationship with Moscow.

Despite the rift between member states, Borrell hopes that the meeting will at least serve to reach a political agreement on this issue. However, the option of suspending the visa facilitation agreement with Russia, which would be the meeting point between member states that call for a total ban, such as Finland and the Baltics, and those receiving tourists who claim to be more selective, is gaining momentum.

In this regard, Czech Foreign Minister Jan Lipavski has pointed to the option of limiting the number of visas and recalled that the premise of the EU’s visa facilitation agreement with Russia is to promote good relations. “And Russia does not want good relations,” he pointed out.

For Lipavski such a move would send a “strong message” to Moscow and would directly attack the Russian elite that benefits from Vladimir Putin’s government. As for the differences between the EU-27, he was optimistic about finding a solution that would convince all European partners and that, in the case of the Baltic countries, would represent a “practical solution” to the situation they are experiencing, receiving thousands of Russian tourists who arrive by road and then travel to the rest of Europe.

If it takes the step, the EU would put an end to the visa facilitation agreement signed with Russia in 2007, which in practice would mean complicating and making the process of obtaining visas more complicated and expensive, as well as increasing the waiting time.

Latvian Foreign Minister Edgars Rinkevics has demanded “at least a road map” on the steps to be taken on visas, defending that for Latvia it is a security issue and “it is not a collective punishment” of Russians. “It is sending the message that as long as Ukrainians continue to die, they are not welcome,” he summed up.

For Finnish Foreign Minister Pekka Haavisto, it is important to make it clear that while Ukrainians are suffering, “tourism is not business as usual.” He has therefore advocated a more restrictive approach to visas to make it more difficult for Russian tourists to come to Europe. Finland has already limited the number of visas since this summer and is now betting on “a similar measure for the whole EU”.

Read:  Truss to meet with Biden privately on the day of Elizabeth II's funeral

In the opinion of the Estonian head of state, Urmas Reinsalu, the entry of Russians into Estonia is a security issue and therefore he has advocated a “new height” of sanctions, including a veto on Russian tourism. “We can take a slower path, but time is crucial, the loss of time is paid for with the blood of Ukrainians,” he has stressed, after calling for a total shutdown of energy trade, new sanctions against the banking system and more ‘blacklists’ of Russian individuals and entities.

For his part, the Danish minister, Jeppe Kofod, has called for a “common line” on visas, showing his support for limiting the entry of Russians into Europe. “Russian aggression has to have consequences on all fronts. Limiting visas sends a clear signal to Putin that what he is doing is unacceptable,” he assessed.

His Irish counterpart, Simon Coveney, said that the expected outcome of the meeting is a “more restrictive visa system”, while Belgian Foreign Minister Hadja Lahbib emphasized the need for a common approach among the EU-27 to prevent Russian citizens from “visa shopping” in Europe.