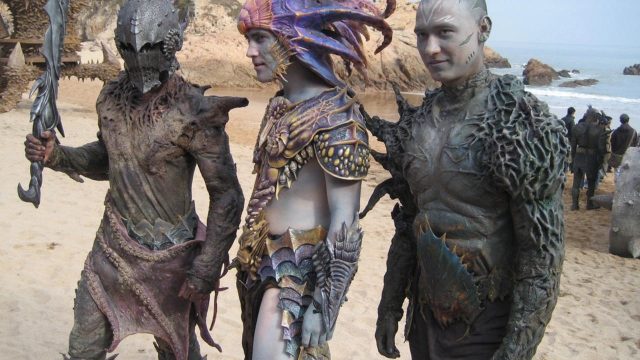 These films have been shot, edited and are ready for release, but for one reason or another, they gather dust on a shelf.

Many films never get past the pre-production stages. Whether it’s failure to secure financing or mysterious delays, some films are just destined to stay out of the public eye. This is most often due to low budget, but every once in a while, even a good production with a big budget and an incredible cast never gets released.

This is often a disappointment because despite the film being completely finished, fans will almost certainly never get a chance to see it.

Before Leonardo DiCaprio won his first legendary Oscar, he was part of a Hollywood frat group dubbed the “Pussy Posse” by an infamous New York Magazine article. The group, which included other young male stars such as Tobey Maguire and Kevin Connelly, developed a reputation as troublemakers, bullies, and generally just plain “bad boys.”

While these traits are largely forgotten, an independent black-and-white film called Don’s Plum documented some of the group’s unsavory characteristics. The film itself is a largely improvised adventure, one that portrays Dicaprio and the group in a very negative light. With their reputations on the line, DiCaprio and Maguire assembled powerful lawyers and filed a lawsuit that ultimately prevented the film’s release in the United States and Canada. DiCaprio and Maguire claim they agreed to be in the film as a favor to a friend, but when they saw how the film was edited, they claimed they were duped.

The Day the Clown Cried

As an urban legend in the film industry, The Day the Clown Cried is a 1972 film starring Jerry Lewis as a clown in a World War II German internment camp. Jerry Lewis, who was known for comedy, was reluctant to take on the role of the clown, but agreed to star in and direct the film. He felt he was doing something useful by exposing the horrors of the Holocaust.

The film had funding problems from the start, with Lewis putting up money for much of the film from his own pocket. The problems that would eventually prevent the film from ever being released arose when the film’s writer, Joan O’Brien, disagreed with the changes Lewis made to the script, mainly his decision to make the clown more sympathetic rather than the cowardly and selfish character she portrayed him as.

While Tony Kaye directed Black Water Transit, his volatile behavior is not the reason moviegoers have never heard of him. An adaptation of Carsten Stroud’s novel of the same name, Black Water Transit tells the story of a shipping executive who gets caught up in a federal investigation centering on an illegal firearms dealer in the aftermath of Hurricane Katrina. Featuring a cast that included Laurence Fishburne and Karl Urban, the film has been described as a Die Hard thriller.

Black Water Transit was reportedly screened at the 2009 Cannes Film Festival. Unfortunately, a seemingly endless stream of litigation kept it away from the big screen. With lawsuits being thrown left and right, it’s unlikely audiences will see any of this film anytime soon.

Read:  Russian cars, a time bomb: 20 years back in time and a terrible risk

Based on the memoirs of Australian publisher Richard Neville, Hippie Hippie Shake is a period drama focusing on the 1960s counterculture. Cillian Murphy plays Neville, and Sienna Miller plays his girlfriend Louise Ferrier, who is on trial for publishing an “obscene” issue of their magazine, Oz.

While screenings have garnered mostly positive reviews, the film remains unreleased after nearly a decade. Exactly why the film was abandoned is debated. Some concerns have been expressed by some of the real-life people portrayed in the film.

From George Sluizer, famed director of The Vanishing, Dark Blood is the story of a young man known only as “the boy who believes the end of the world is near”. The boy lives in self-imposed exile in the desert after his wife dies of radiation poisoning from nearby nuclear weapons testing.

Unfortunately, River Phoenix, who plays the title character, died suddenly during filming, leaving the fate of the film hanging in the balance. Sluizer estimated that about 80% of the film had been completed before Phoenix’s death and was desperate to finish it. He even approached River’s younger brother Joaquin to complete the film, a request the Phoenix family rejected.

Empires of the Deep

Following the massive success of James Cameron’s Avatar, China tried to cash in on sci-fi humanoids fighting each other and Empires of the Deep was born. It’s a fantasy epic that, judging by the trailer, revolves around mermaids battling giant crocodiles and it all ends in an interspecies romance with Spartan warriors.

Starring former Bond girl Olga Kurylenko, Empires of the Deep had a budget of $130 million and went through about 40 drafts over five years with eight different writers. The budget was the largest in Chinese film history, but production was troubled from the start. Different directors seemed to start work on the film only to be replaced soon after, the cast was made up of largely unknown actors, and the effects film was plagued by delays in playback.

Eventually, a trailer was unveiled to industry critics and was met with harsh criticism. The film, which was billed as a rival to Hollywood releases, looked bad. By no means a $130 million epic.

The Brave was the first and only film directed by Johnny Depp. It was an adaptation of a novel of the same name by Gregory MacDonald, revolving around a Native American man named Raphael and his family living in extreme poverty. Raphael is left devastated by his inability to support his family. Depressed and seeing no other options, he agrees to star in a film in exchange for a large sum of money. The bleak film explores Raphael’s relationships in the last week of his life.

Featuring a truly inspired performance by screen legend Marlon Brando and some truly heavy subject matter, The Brave received mixed reviews at the 1997 Cannes Film Festival. American critics were particularly critical of the film and attacked Depp because his name was all over the place, as star, writer and director. Disgusted by the hostility of the American press, Depp banned its release in the United States, insinuating that the American press was simply pillorying him because of his rise.

Read:  The Rings of Power has "torn Amazon Prime in half": fans really missed Lord of the Rings

Today, Quentin Tarantino is a household name for his ultraviolent black comedy films. But before Tarantino won awards and accolades around the globe, he was working at a small video rental store in California and taking acting classes, hoping to one day become an actor.

Tarantino’s friend and colleague had written a short screenplay about a man trying to do something nice for his friend’s birthday, only to have his efforts backfire in comical ways. Tarantino helped flesh out the script into a feature film and, with $5,000, the two set out to produce the film. Enlisting the help of friends from his acting class and other colleagues at the video store, Tarantino co-wrote, co-directed and starred in My Best Friend’s Birthday.

The original editing of the film lasted approximately 70 minutes. However, due to a fire in the processing lab, about half of the footage was destroyed. The surviving footage was made into a 36-minute short film, which was screened at film festivals but was never commercially available. While it’s more a curiosity than anything, the good news is that it’s not that hard to find on the web.

In 1998, the son of franchise creator Tobe Hooper, William Hooper, set out to make a short film that explored the past of everyone’s favorite family of cannibals. The short turned into a 60-minute feature that featured Bill Moseley reprising his role as Chop Top from Texas Chainsaw Massacre 2. The story was a prequel/sequel that featured Chop Top reminiscing about his family’s penchant for blood while orchestrating one last massacre. Supposedly the entire movie was filmed and a trailer even hit the internet about 15 years ago. Since then, there has been little news about the project. A Kickstarter campaign was launched a few years ago to get funding for post-production, but it didn’t meet its goal. Judging by the quality of the trailer, perhaps it’s a good thing this film remains buried.

A documentary film that chronicled the Rolling Stones’ 1972 American tour in support of their album Exile on Main Street, Cocksucker Blues was never released – and almost certainly never will be. The tour was highly anticipated, as it was the first time the Stones had visited the United States since the 1969 Altamont free concert, in which a fan was stabbed and beaten to death by the Hells Angels.

The documentary was filmed observationally. Numerous cameras were available backstage for anyone to pick up and begin filming. This allowed the cameras to capture backstage parties, drug use and other examples of debauchery. Fearing the film would tarnish their reputation, the Rolling Stones took the film to court because they didn’t want it released to the public.