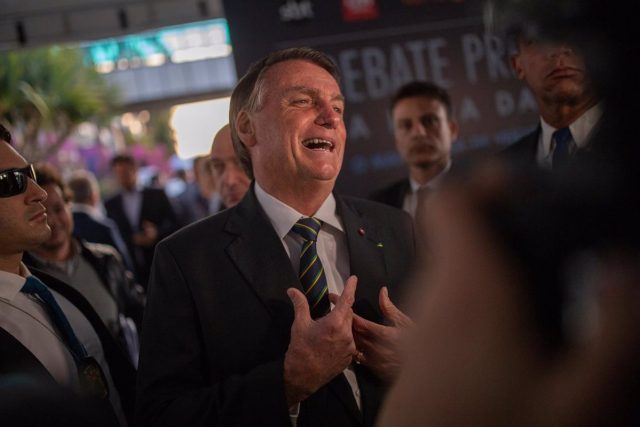 The current president of Brazil and candidate in the country’s elections, Jair Bolsonaro, has affirmed that he has “total confidence” in the second round in which he has to face the leader of the Workers’ Party, Luiz Inácio Lula da Silva.

Thus, Bolsonaro has celebrated the result he has achieved, since the polls predicted a sharp fall of the candidate and the victory of Lula da Silva even in the first round.

“Now it is total confidence,” he has assured, after emphasizing that he had overcome the “lies” of the research institutes, referring to the publications of the polls of the Datafolha company.

With 97.07 percent of the votes counted, Lula da Silva, leader of the Workers’ Party, has emerged as the winner of the first round, winning 47.88 percent of the ballots –more than 54.8 million votes–. Meanwhile, the current outgoing president and leader of the Liberal Party, Bolsonaro, obtained 43.68 percent –more than 49.7 million voters–, according to data released by the Supreme Electoral Court.

Read:  Heavy flooding in Iran leaves at least 56 dead in the last 48 hours

The difference between the two main candidates is reduced to just over four percentage points, as indicated by the counting of practically all the ballot boxes.

In the first statement made by Bolsonaro, who heads the Liberal Party, after the results of this Sunday’s elections, he has indicated that he sees a sense of change in the country that may be negative for the country.

“I understand that there is a will for change on the part of the population, but there are certain changes that may come for the worse,” he has stated, as reported by the newspaper ‘O Globo’.

The president has also asserted that he is open to negotiate with those candidates who have not passed to the second round. “The doors are open for conversation,” he declared, after adding that the voters of Simone Tebet and Ciro Gomes “are much more sympathetic” to his ideals than to those of his rival.

Simone Tebet, in third place, has won 4.22 percent of the vote. Ciro Gomes, in fourth place, obtained 3.06 percent. The rest of the candidates did not exceed 1 percent of the ballots.