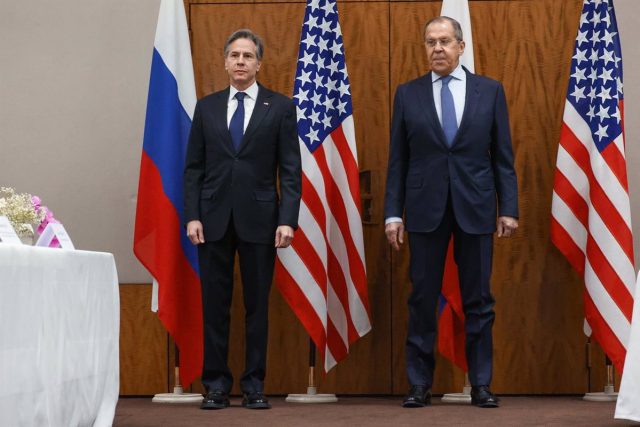 Russia again denounces a “propaganda campaign” and the expansion of NATO in Eastern Europe.

The US Secretary of State, Antony Blinken, has assured his Russian counterpart, Sergei Lavrov, that the diplomatic channel to resolve the Ukraine crisis remains open but has asked the Russian Government to provide a show of good faith to de-escalate the situation or otherwise you will be met with a “massive transatlantic response”.

“The diplomatic path to resolve the crisis remains open, but requires Moscow to de-escalate and engage in good faith talks,” according to a State Department statement.

Blinken has reiterated, however, that he reiterated that if Moscow “follows the path of aggression and continues to invade Ukraine”, this position will trigger “a determined, massive and united transatlantic response”.

Lavrov, on the other hand, has once again denounced a “propaganda campaign launched by the United States and its allies about ‘Russian aggression’ against Ukraine”, which “pursues provocative objectives”, and incites “the Kiev authorities to sabotage the Minsk agreements” on the regional situation.

Lavrov again claimed that “Washington and Brussels are ignoring key provisions for Russia, mainly on the non-expansion of NATO in Eastern Europe and the non-deployment of attack weapons systems near Russian borders,” according to the note published on the website of the Ministry.

Blinken assured this Friday that Russia has sufficient capacity to invade Ukraine “at any time, even during the Olympic Games” of winter that are taking place these days in Beijing.

The Secretary of State has asked US citizens to leave Ukraine “now” due to the risk of a military escalation, he has once again put on the table the short-term risk of an invasion of Ukrainian territory, after the White House left aside the term “imminent”.