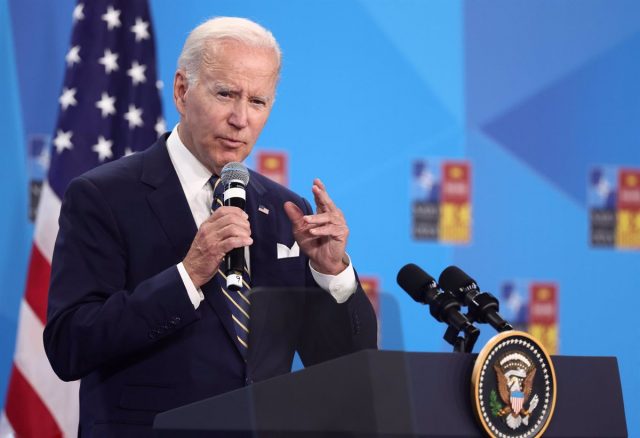 U.S. President Joe Biden on Tuesday signed the document ratifying that the U.S. Congress is in favor of Sweden’s and Finland’s accession to the Atlantic Alliance.

At the ceremony, Biden was accompanied by the Swedish and Finnish ambassadors in Washington, Karin Olofsdotter and Mikko Hautala, respectively, as well as other senior officials, such as the Vice President, Kamala Harris, or the Speaker of the House of Representatives, Nancy Pelosi.

The President also held a telephone call with his Finnish counterpart, Sauli Niinisto, and the Prime Minister of Sweden, Magdalena Andersson, before signing his approval of the accession of both countries to the Atlantic Alliance.

Biden congratulated them “on the swift ratification” of their protocols of joining NATO and welcomed both countries for this step forward in their process to “become NATO allies.”

“President Biden affirmed that the United States will work with Finland and Sweden to remain vigilant to any threat to our shared security and to deter and confront aggression or threat of aggression,” the White House said in a statement.

Later, the president sent a letter to Harris herself, who also holds the presidency of the Senate, in which he remarked that agreeing to the accession of Sweden and Finland to the Atlantic Alliance “will not have the effect of increasing the overall U.S. percentage share of NATO’s common budgets.”

Also, the missive, picked up by the White House, stresses that the possible joining of both nations to the military alliance “does not detract from the ability of the United States to meet or finance its military needs outside the North Atlantic area.”

Finland and Sweden had refused for decades to apply for NATO membership, although they have changed their position as a result of the Russian invasion of Ukraine, unleashed on February 24 on the orders of Russian President Vladimir Putin.

The accession of Sweden and Finland was unblocked at the Madrid summit of June 29-30, when the leaders invited both candidates, after an agreement was reached in the run-up to the meeting for Turkey to lift its veto in exchange for a greater commitment by the Scandinavian countries in the fight against the terrorist group Kurdistan Workers’ Party (PKK).

Both countries took a further step on July 5 in joining NATO with the signing of their accession protocol, with which they become ‘de facto’ members of the military alliance pending formal ratification. Afterwards, NATO Director General Jens Stoltenberg spoke of a “historic day”.