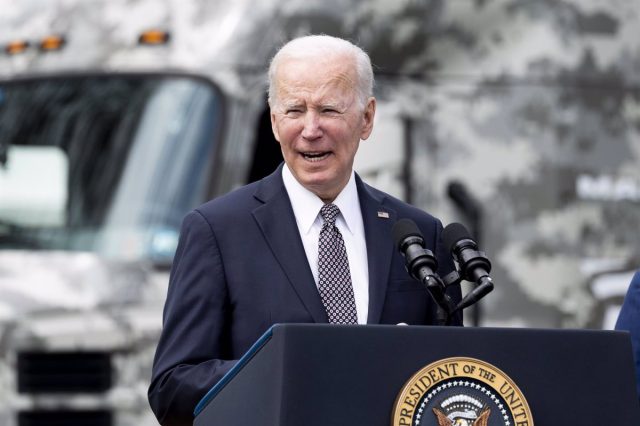 The Joe Biden Administration has requested this Thursday from the United States Congress additional funding for Ukraine worth 33,000 million dollars (more than 31,300 million euros), which would be used for security, economic and humanitarian assistance.

“It is critical that this funding be approved and as quickly as possible,” Biden said in an appearance in which he insisted that Washington “is helping Ukraine defend itself against Russian aggression.”

The US president has reiterated that he does not plan to send troops to Ukraine and has insisted that Washington “is not attacking Russia.” “Russia is the aggressor…no buts…and the world must hold it accountable,” he said.

Read:  The 50 migrants sent by the governor of Florida to Massachusetts will take refuge in a military base.

Members of Congress believe it is necessary for Ukraine to receive more US funding, but it is not clear how quickly this additional aid package would be approved, according to the CNN television network.

This Thursday, Biden plans to send Congress a legislative proposal that seeks to pressure the Russian oligarchs in retaliation for the war in Ukraine. One of his points is the use of money from his seized assets to finance Ukrainian defense, according to the White House.

The United States, together with its partners, has imposed several sanctions packages against Russia in response to the invasion of Ukraine, while at the same time has allocated economic resources to help kyiv at different levels.

On the other hand, Biden has described as “irresponsible” the comments about the possibility of triggering a nuclear war.

“No one should make idle comments about the use of nuclear weapons or the possibility or necessity of using them,” he said, referring to the words of Russian Foreign Minister Sergei Lavrov, who said earlier this week that the ” The danger (of nuclear war) is serious, it is real, it cannot be underestimated.

In addition, he has said that “it is not true” that the United States and NATO are waging a third-party war against Russia and has emphasized that these accusations by Moscow are “an excuse for its failure” in Ukraine.

“It doesn’t bother me because it shows the desperation that Russia feels at their abject failure to be able to do what they planned to do in the first place,” he said.