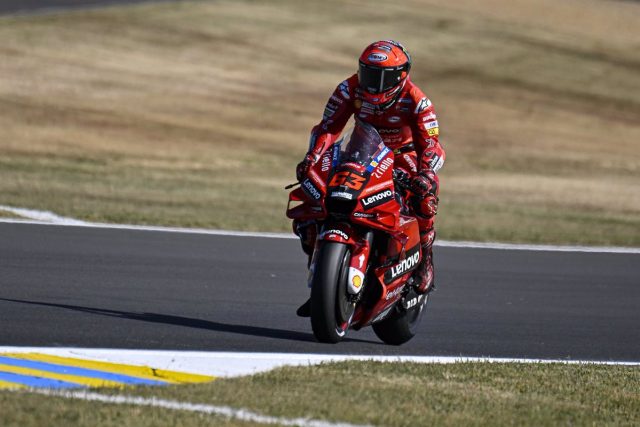 The Italian rider Francesco Bagnaia (Ducati) will start from pole this Sunday in the MotoGP race of the French Grand Prix, the seventh round of the Motorcycle World Championship, commanding a front row in which he will be accompanied by the Australian Jack Miller (Ducati) and the Spanish Aleix Espargaró (Aprilia), with the leader of the championship, Frenchman Fabio Quartararo (Yamaha), starting fourth.

In this way, ‘Pecco’ leads the double for the Ducati Lenovo on the front row of the grid, where the oldest of the Espargaró will also be, third in Jerez and second in the World Championship and who will try to stay ahead of ‘El Diablo’, who looking for his first victory on the French track, to ‘scratch’ points in the championship.

The one from Nice, the fastest in the free quarters and who is seven points ahead of Granollers in the general classification, took control of the final session, which was joined by the Spaniards Joan Mir (Suzuki) and Jorge Martín (Ducati) as the fastest in Q1.

However, less than two minutes later, Bagnaia, winner in Jerez, emerged to snatch the privileged position from him, and the good times of Miller and Espargaró also unseated him from the front row.

For his part, Joan Mir will start seventh, just ahead of his teammate Àlex Rins (Suzuki), both protagonists this weekend due to the surprise announcement of Suzuki’s departure from MotoGP. In addition, Jorge Martín will start ninth, and the Repsol Hondas of Marc Márquez and Pol Espargaró will start from behind, tenth and eleventh respectively.

Among those who did not manage to pass Q1, Maverick Viñales (Aprilia) will start fourteenth, Àlex Márquez (Honda) twenty-first and Raúl Fernández (KTM), twenty-fourth and last.