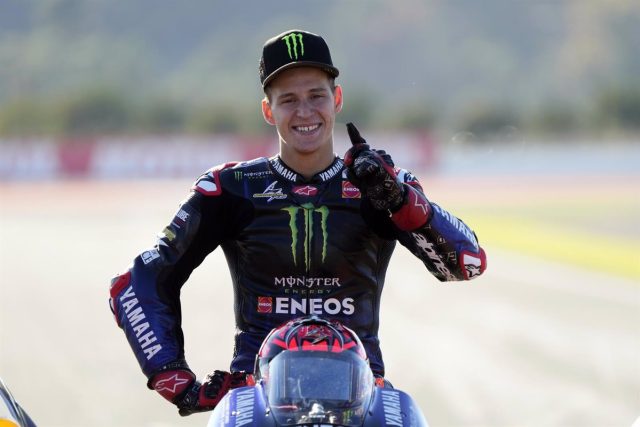 The French rider and reigning MotoGP champion Fabio Quartararo (Yamaha) assured that there is no added pressure to think that he has to win another World Championship “yes or yes” and, on the other hand, acknowledged that fighting for the title against Marc Márquez (Honda ) will be “different” from doing it, like last year, against other drivers.

“The pressure was more to see if I could achieve this dream. But when I have already achieved it, now the motivation is greater to do it again. I am going to do like last year: I start this year as if I had never won and I want win it. It is not an additional pressure to say ‘I have to win again yes or yes'”, he assured in an interview on DAZN collected by Europa Press.

Looking ahead to the 2022 championship, which starts in March in Qatar, he asks the new Yamaha to be able to give him more speed. “Basically, I expect the same as last year: more top speed. Speed, and we’re working on an aerodynamics thing now, but ‘top speed’ is something we need,” he was candid.

A top speed that will do him good to fight to retain the title. And he hopes that, leaving the injuries and diplopia behind, Marc Márquez will be in the fight. “Marc has been the benchmark for the last 10-15 years, so I think it’s something special to fight Marc. I’m looking forward to fighting him this year,” he said.

“I don’t have to prove anything to anyone, but the pleasure of fighting with Marc is different from any other rider. When you fight with him, you see something else, you see more than a rider, you see a guy who has been a 6-time MotoGP champion and beating him is something else”, acknowledged the Frenchman.

At 22 years old, he believes that the young drivers and some ‘rookies’ can already surprise this year, and he singled out the Spaniard Raúl Fernández. “As a rider, he is the one with the most talent, but later it will depend on many things. Bezzecchi has been very fast, there is Di Giannantonio too, there is Remy. Darryn has a little more trouble because in the end he has gone up from Moto3 to MotoGP but, For me, in Sepang, I was quite surprised. It will be a good fight”, he predicted.

As for the future, and his plans at Yamaha, he left the exit door open. “It’s a brand that has given me a lot, a lot of confidence because they promoted me from Moto2 when I hadn’t done many things. But afterwards, what I want is the best bike and the best project. I wouldn’t say it’s my brand, but all the The years I’ve spent have been great. Nothing is done yet, so no, I’m not one hundred percent with a brand, but I am with the best project,” he said.

He pointed out, yes, the good atmosphere that exists in the box. “I am someone who is very easy to work with, but above all, I am someone who, when he is working, is one hundred percent work. Since 2019, we have built a team and I think it is working very well. I get along very well with everyone, which is the main thing,” he said.

As for the disagreements with his former teammate Maverick Viñales, now on Aprilia, he tried to explain them. “When I saw these difficulties, in the end, the only thing I thought was ‘many of us have problems’, but I have one thing in mind, which is to always look at who is the first on the list in each batch, not look at who is the first Yamaha, or who is the first in the team. The goal is always there and I have never looked at anything else, “he said.