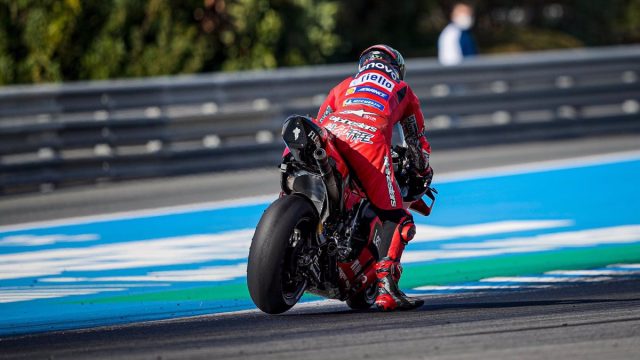 The Italian rider Francesco Bagnaia (Ducati) led the second and final day of testing this Friday at the Jerez-Ángel Nieto Circuit, in which the factories continued to test their innovations for the 2022 season and in which Pol Espargaró (Repsol Honda ) debuted with the new RC213V.

With a time of 1:36.872, the fastest in the two days on the Andalusian track, the winner of the Comunitat Valenciana Grand Prix and runner-up in the premier class topped the time table ahead of the new MotoGP champion, the Frenchman Fabio Quartararo (Yamaha), at 0.452 seconds, and the Spanish Àlex Rins (Suzuki), at 0.551.

Meanwhile, Pol Espargaró (Repsol Honda) enjoyed his first contact with the new 2022 RC213V, with which both the Japanese Takaaki Nakagami and Àlex Márquez (Honda) rode on Thursday. Testing the different aerodynamic packages, Granollers finished fourth of the day.

“Today it has been shown why we are here, although physically I am suffering a bit to be able to test in good conditions what the new bike could be (…) Today we have been fast even with the strong wind and it is good to try things on these conditions. We’ve made good steps, but we can’t stop and we must keep pushing. We’ve been working hard to get more grip, especially at the rear, and the new options Honda has brought us continue to help with this. The bike is faster and safe, you feel that it is easier to do fast times per lap”, said Pol Espargaró.

The ‘Top 5’, all from different factories, was completed by the also Catalan Maverick Viñales, who will face his first full season with Aprilia next year and who rode the new bike, in which the Italian brand from Noale bets on a different chassis .

Read:  Maverick Viñales: "My main goal is to grow the bike, we have great potential"

In addition, the transalpine Fabio di Giannantonio was the best of the ‘rookies, of the queen category, nineteenth more than a second and a half behind the great dominator and just one place ahead of the Spaniard and Moto2 runner-up Raúl Fernández, who could not shoot too much for technical problems.

At Ducati, the new aerodynamics of the Desmosedici GP were put to the test, while Yamaha has an updated version of its new chassis, as well as a new front fairing. Suzuki has some small aerodynamic tweaks that contain different side fairings, in addition to testing its 2022 engine.