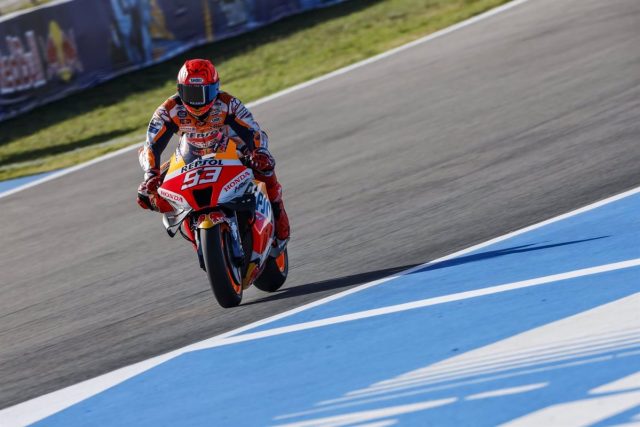 The Spanish MotoGP rider Marc Márquez (Repsol Honda) acknowledged that they had taken advantage of Friday at the Spanish Grand Prix to risk “a little to try some things” on his bike, with which he felt “better” in the second round of free, frustrated by their fall.

“Today we took a bit of a risk to try some things. In the morning I rode more or less with the same bike to start to pick up my rhythm because the track was not in the best conditions and in the afternoon I tried other things and, unfortunately, , I fell with the bike with which I felt better and I couldn’t continue”, said Márquez in statements provided by his team.

The one from Cervera, nineteenth in the combined time table, lamented the mishap because “the second bike has meant a big change” and he has not been able to feel “good about it”. “We have to improve and close the gap with those in front. Saturday is the day to go back to what we know how to do,” he added.

For his part, his teammate, Pol Espargaró, who finished seventh fastest on Friday, made it clear that “the goal for the weekend” is to focus mainly “on riding the bike in order to move forward”.

Read:  Ancelotti: "The team with the most courage and personality will win the final"

“We’re here to do our best and keep working, that’s what we did today, Friday. We’ve tested a few things in FP1 and FP2, but during a race weekend it’s very tight on time, so you have to find the balance,” he added.

The Catalan believes that his “rhythm is quite good”, but that they still have to “improve their speed a bit over one lap” because being half a second behind Fabio Quartararo (Yamaha) is “too much”. “But there are some points that are working so we can be happy with the start we’ve made,” he said.