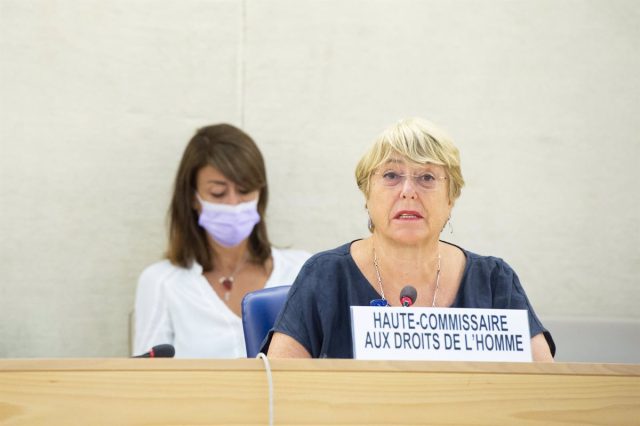 The United Nations High Commissioner for Human Rights, Michelle Bachelet, denounced on Monday that the current crisis in Ukraine has so far left 102 dead, including seven children, another 300 injured and some 422,000 refugees.

“The military attack on Ukraine is endangering countless lives. Most have been killed by explosive weapons, including heavy artillery shelling, multiple missile launch systems and airstrikes. The real numbers are, I fear, considerably higher,” has lamented.

“Meanwhile, millions of civilians, including the elderly and vulnerable, are forced to take refuge in various places, such as underground stations, to escape the explosions. UNHCR has reported that 422,000 people have fled the country, and many more are displaced. internal,” he said.

Given this, Bachelet has stressed this Monday in her opening speech before the United Nations Council in Switzerland, the need for collective action by the entire international community to face the “serious” situation that is currently being experienced in Eastern Europe .

“In a time of crisis, investing in multilateral actions based on Human Rights provides quick and effective solutions, in addition to charting the path towards greater development and peace,” Bachelet said.

“Our message has been that it is necessary to do more to prevent conflicts and Human Rights crises. Now is the time for strong preventive action that matches our words,” emphasized Bachelet, who has called for absolute respect for the Charter of United Nations.

“Many societies are evolving, or sinking, into greater repression,” warned Bachelet, who points directly from these ills to the repercussions brought about by the health crisis of the pandemic, the growing polarization, the environmental damage, or the campaigns of disinformation based on hate and distortion of democratic institutions.

The current crisis in Ukraine, he says, takes place at a time when the “remarkable progress” that has been achieved over the last two decades in terms of improvements in access to education, or in the reduction of of poverty and conflict.

“The calls for peace and human rights that come from people around the world warn us that our future must not be a world that has detached itself from the obligations agreed in the Universal Declaration of Human Rights”, he emphasized.

Bachelet has indicated that the next few days will be “vital” and has appealed to the “unity” of the entire international community to face this “serious” and “fundamental” moment. “In doing so, I ask that we all place, first and foremost, people, their shared and universal rights and aspirations, at the center of our deliberations,” he said.

“There are no winners or losers here,” explained Bachelet, who recognized that the conflict is already creating a humanitarian need on a scale “that far exceeds” the current assistance capacity.”

“It is destroying lives and economies, driving people from their homes and creating bitter grievances and despair. We know that once the violence begins to escalate, the options for solutions become increasingly difficult,” he warned.