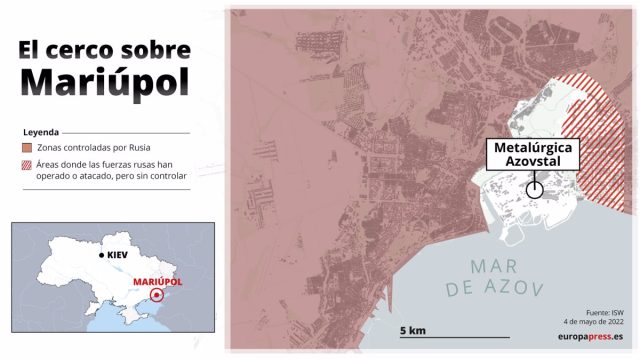 Situation of the siege of Mariúpol (Ukraine) as of May 4, 2022 – Europe Press

At least 344 people have been evacuated from Mariupol during the day on Wednesday, as reported by the Deputy Prime Minister of Ukraine, Irina Vereshchuk, a few hours after Russia announced a temporary ceasefire around the steel plant in Azovstal, in the besieged city.

“These (civilians) are women, children and elderly people from Mariupol, Mangusha, Berdyansk, Tokmaka and Vasylívki. All of them have just arrived in Zaporizhia. Another small victory for us,” he said in a statement.

For its part, the International Committee of the Red Cross (ICRC) has reported a similar figure and has specified that around 300 civilians from Mariúpol have been evacuated to Zaporizhia this Wednesday after an operation coordinated by the ICRC and the United Nations.

“We are relieved that more lives have been saved”, said the head of the ICRC delegation in Ukraine, Pascal Hundt, who welcomed “the renewed efforts of the parties regarding safe passage operations”. “They remain crucial and urgent in light of the immense suffering of civilians,” he added.

Read:  AI denounces illegitimate use of force and documented deaths during May protests in Iran

Hours earlier, Russia has reported a ceasefire, to organize humanitarian corridors, which will be in force from 8:00 a.m. to 6:00 p.m. (local time) on Thursday, Friday and Saturday, sources from the humanitarian affairs team of the Russian Ministry of Defense, according to the DPA news agency.