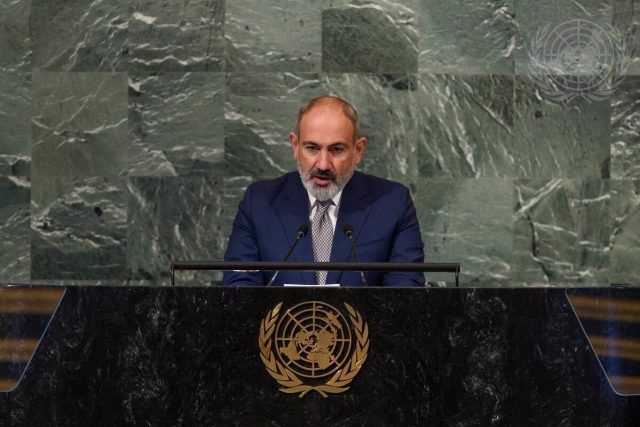 Armenian Prime Minister Nikol Pashinian has accused Azerbaijan before the UN General Assembly for having carried out “unspeakable atrocities” during its latest aggression on Armenian territory, and blamed the Azeri government for destabilizing the South Caucasus region.

“On September 13, Azerbaijan launched a military aggression.
unjustified against Armenia using heavy artillery,
multiple rocket launchers and unmanned aerial combat vehicles (…) was a direct and undeniable attack on Armenia’s sovereignty and territorial integrity,” the Armenian prime minister has said in his speech.

Pashinian has enumerated at 7,600 people who, because of the attacks of his neighbor, have had to be displaced from the city of Jermuk, a town characterized by its health centers, spas and rest areas, according to the president.

Read:  Bolsonaro "totally confident" in the second round of Brazil's presidential runoff election

“All residents of this town are displaced. The total number of people temporarily displaced from the is more than 7,600 people, mostly women and the elderly, including 1437 children and 99 people with disabilities,” he added.

He has also listed “evidence” of cases of torture, such as mutilation of captured or already dead servicemen, “numerous” cases of extrajudicial executions and ill-treatment of Armenian prisoners of war, as well as humiliating treatment of their bodies.

“The corpses of Armenian military women were mutilated and then proudly videotaped with particular cruelty by the Azeri military,” Armenia’s prime minister has lamented.

Read:  Ukraine evacuates more than 4,500 people through humanitarian corridors in the last day

“Undoubtedly, the commission of these unspeakable atrocities is a direct result of a decades-long policy of implanting anti-Armenian hatred and animosity in Azeri society by the political leadership,” Pashinian has sentenced.

In this regard, he assured that the fighting that took place last week between the two countries was not “a border clash”, but “a direct and undeniable attack on the sovereignty and territorial integrity of Armenia”.