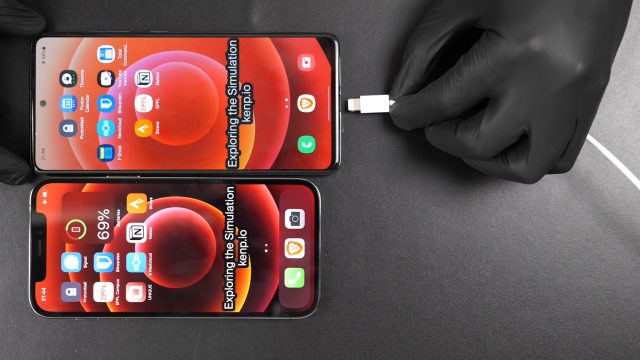 On April 1, Ken Pillonel, the Swiss who managed to create the first iPhone X with a USB-C plug last year, posted a short video on his YouTube channel in which he also demonstrated a project that seemed to be the exact opposite of the original. He showed the charging of a Samsung smartphone with a Lightning cable, promising a more detailed clip explaining the whole process. At the time, many thought it was a joke, but he did return to his channel, now renamed “Exploring the Simulation,” with a step-by-step clip showing how he integrated a Lightning plug into a Galaxy A51.

A Samsung Galaxy A51 has undergone significant changes for this project

As with the modified iPhone, the project seems to be quite complex. Apple’s Lightning plug is slightly larger than the USB-C plug inside, while Apple’s cables are equipped with chips that can detect whether or not they’re connected to an Apple device. If the phone is not detected, power is not available.

Read:  Just bought an iPhone? Here are some tips to protect it

Thus, for this project, a special chip was needed, which can “trick” the cables from Apple that the Samsung phone is an iPhone, which then allows the power supply. However, with limited space inside the Samsung phone, some changes were required. Some pieces of plastic have been filmed to accommodate the extra components. Even on the outside, it was necessary to change the frame of the phone, while the plug on the inside was 3D printed several times, with small dimensions.

However, the experiment was a success, but Pillonel also admits that it was more of a fun project, just to show that you can change an Android phone at home to be powered by a Lightning plug. However, because this is not practical, or that many users want, it will not provide the necessary scheme for the reproduction of the project, nor has it invested time and money in developing proprietary components to make the process easier. However, Pillonel promises to return with interesting projects on his channel in the near future.