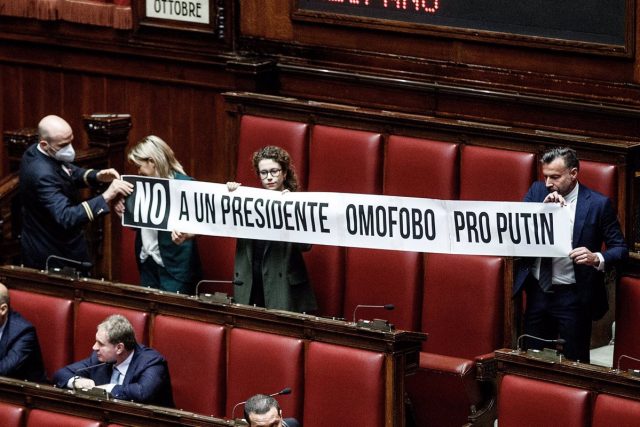 Italian lawmakers on Friday elected Lorenzo Fontana, a member of Matteo Salvini’s League, as the new president of the Chamber of Deputies, allowing the two main right-wing formations to split control of Parliament following the victory of the Brothers of Italy candidate in the Senate.

It took four votes and the reduction of the requirements for approval – an absolute majority was already sufficient on Friday – for the right-wing alliance to succeed in approving, with 222 votes in favor, the candidacy of Lorenzo Fontana, proposed on the first day by the League and with government experience.

“We will elect the president of the Chamber on the first ballot,” Meloni had predicted on his arrival at the parliamentary seat, according to the Rai channel. “Our candidate is Lorenzo Fontana,” he emphasized, after Thursday’s session in the Senate was marred by the division in the three-party conservative bloc, in particular by former Prime Minister Silvio Berlusconi’s criticism of the negotiations to form a government.

Read:  Greens narrowly support plan to extend use of coal to generate electricity

The left has moved in vain its own candidacy, knowing that it had no choice against Fontana. During the session, several deputies of the Democratic Party have displayed a banner against him: “No to a pro-Putin homophobic president”.

The new president of the Chamber–third institution by rank in Italy–has stressed that it will be an “honor” to assume his new post. “Thank you to those who voted for me and to those who did not,” he said in his first speech.

Brothers of Italy, League and Forza Italia must still finish weaving the new government, with a view to bringing before the President of the Republic, Sergio Mattarella, a more or less armed proposal. Mattarella must call all the parties with parliamentary representation before commissioning the formation of an Executive to replace that of Mario Draghi, which, foreseeably, will fall in the hands of Meloni.

Read:  French journalist detained in Benin after entering a "military zone" in the north released