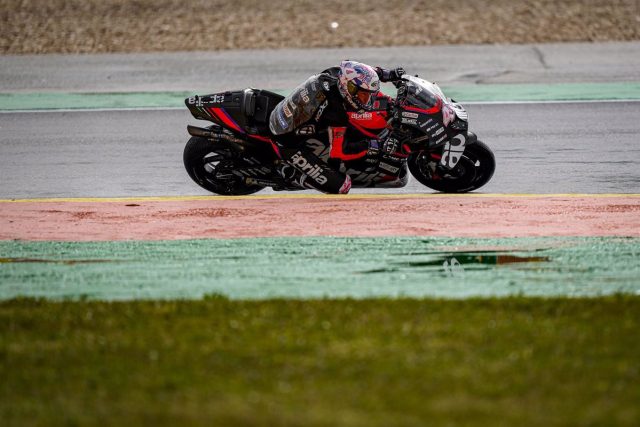 The Spanish MotoGP rider Aleix Espargaró (Aprilia) assured that he is “optimistic about” getting on the podium at the Spanish Grand Prix that will take place this weekend at the Jerez-Ángel Nieto circuit, and acknowledged that “it was not easy imagine” that the bike gave the level it is giving to place him third in the championship

“In the last season we were very good at Jerez, we were close to the podium and the victory, and I hope that with this year’s bike, which has improved a lot, we can be more competitive. I am optimistic about the podium, this year the things have changed for us”, explained Espargaró at the press conference prior to the Spanish Grand Prix, where last year he was sixth.

So far this season, the Catalan rider is third in the World Championship and comes to the test after getting on the podium in Portugal. “I feel good and I’m enjoying this season. I felt good with the bike in preseason, but it wasn’t easy to imagine reaching this level,” said the rider from Granollers, who still knows that they have “to improve in some areas”, but that in general he is “satisfied with the bike”.

Read:  Pol Espargaró: "We have found those feelings that we were missing last year"

“Neither Aprilia nor I have fought for the title in the past. We have to keep working, giving our best, being at the front in all the races and enjoying the moment”, explained Aleix Espargaró, who leaves the door open to the future. “We’ll see who is the main contender to win in race 15, now it’s about enjoying,” he said.

The Catalan also spoke about how difficult it is to gain positions, which he attributes “to the wings and aerodynamics” because “it is more difficult to stop the bike” while following. “All the riders brake at the limit and it’s more difficult to make a difference. But you can overtake, in any case, and you can do it cleanly,” explained the Aprilia rider.

Read:  Viñales: "Soon we will be ready to win the World Cup"

The Spanish rider sees the Jerez race as very close, because in it “the differences with respect to the tests are enlarged”. “You have to stick to the essentials and not force yourself, because the differences are marked in the last laps,” said the Catalan, who this season managed to win the Argentine Grand Prix.

Regarding his future, Aleix Espargaró was happy with his team, although he admits that it is still early to talk about it. “It makes me happy to be at this level with Aprilia. I would love to do two more years in MotoGP and I would love it to be with Aprilia but I don’t have a clear offer on the table. I can only fight, try to win, and we will see,” he concluded.