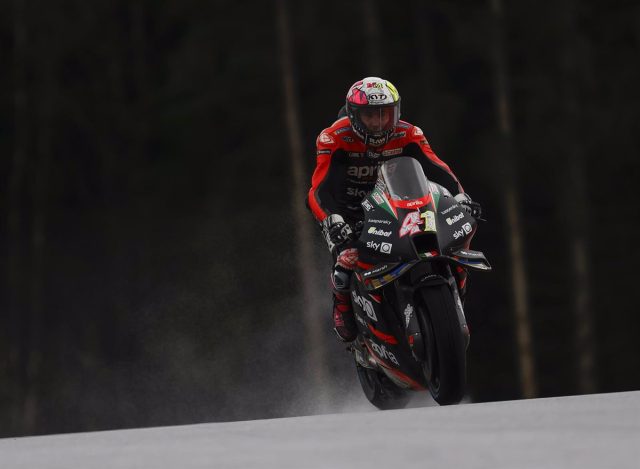 Espargaró beats the Ducati squad at Mugello on his Aprilia

The Spanish rider Aleix Espargaró (Aprilia) in MotoGP, the British Jake Dixon (Kalex) in Moto2 and the Italian Dennis Foggia (Honda) in Moto3 were the fastest after the first two free practice sessions of the Italian Grand Prix, which took place race at the Mugello circuit.

The queen category left an early exhibition by Aleix Espargaró, who celebrated his renewal (like that of his teammate Maverick Viñales) with Aprilia until 2024 with a time of 1:45.891 to dominate and scare the Ducati squad, who took from second to the sixth place.

The indomitable Aleix Espargaró left behind Francesco Bagnaia, Jack Miller, Johann Zarco, Luca Marini and Enea Bastianini, all of them riding official or satellite Ducatis, with ‘Pecco’ Bagnaia being the only one who stayed close to the Catalan, 49 thousandths of second. The third on Friday, Miller, was already more than 4 tenths.

The Australian, like Bagnaia and like Zarco, came to be at the head of the combined virtual classification until Espargaró, with 2:30 minutes remaining in FP2, took the lead.

And there were no changes in a rough session, with track exits and two crashes for Zarco, who debuted the new colors at Prima Pramac Racing on the ground (and causing a red flag). Seventh, after all those Ducati, was Brad Binder (KTM), with the leader of the World Championship Fabio Quartararo (Yamaha) ninth and Pol Espargaró (Honda), tenth.

Far away the first KTM, the first Yamaha and the first Honda. Too much, with Marc Márquez suffering to be twelfth. And unless the race pace may be better than the pace set in one lap, everything points to the fact that in Mugello it will be the Ducati, and the Aprilia of Granollers, who will fight for the win and the podium.

SURPRISE IN MOTO2 AND FOGGIA LEADS AT HOME IN MOTO3

The Moto2 and Moto3 categories were peculiar, to say the least, and better times were seen in the first round than in the second. In the intermediate category, in addition, there was surprise to be the fastest, thanks to the FP1 time, the British Jake Dixon.

He surpassed the Spaniards Augusto Fernández and Arón Canet with a time of 1:53.459 by more than three tenths, who closed the first day of the weekend in Mugello with the second and third fastest times, although without improving their morning records either. Canet, third in the World Championship, started much better than Ai Ogura, second, and the leader Celestino Vietti, who were 17th and 12th respectively.

In Moto3, the Italian Dennis Foggia (Honda) also asserted his morning time, being the only one to go down to 1:56 on the Italian track, while Jaume Masià (KTM) was second in the combined after being the best in FP2 , with the British John McPhee (Husqvarna) third and the Spanish Sergio García Dols (GasGas), leader of the World Championship, finished seventh.