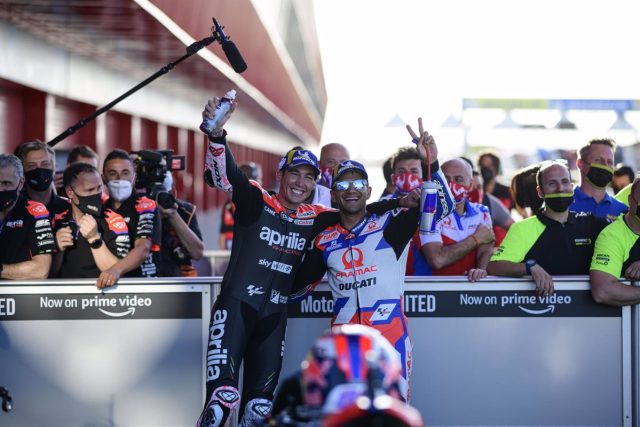 Martín and Rins complete a Spanish podium in Argentina

The Spanish MotoGP rider Aleix Espargaró achieved his first victory, after 200 races, by winning the Argentine Grand Prix this Sunday, the third round of the World Championship that had a clear Spanish role, with Jorge Martín (Ducati) and Álex Rins (Suzuki) sharing the podium.

Aleix signed a historic victory for Aprilia, his first victory in the premier class, to which they returned in 2015. The Catalan had the rhythm, he had commanded the entire weekend, and at the moment of truth he had to fight with Martín.

The Ducati rider came out better and snatched the privileged position but, in a one-on-one, Aleix Espargaró studied his moment and went on the attack less than 10 laps from the end. On the third attempt, the Aprilia rider managed to take the lead and endured the last five laps in that position, which had eluded him until now.

Behind, the podium was between Rins and Pol Espargaró, but the Repsol Honda rider crashed 11 laps from the checkered flag. Thus, the Suzuki rider was left on a platter for the podium, although without being able to aspire to more. Behind there was also a Spanish color, since Joan Mir (Suzuki) entered fourth.

Aleix Espargaró’s victory earns him the leadership of the World Championship, with 45 points, ahead of Brad Binder (KTM) who was sixth in the return of the Championship to Argentina three years later. Rins is fourth overall with 36 points, just two behind Binder and tied with Enea Bastianini (Ducati).