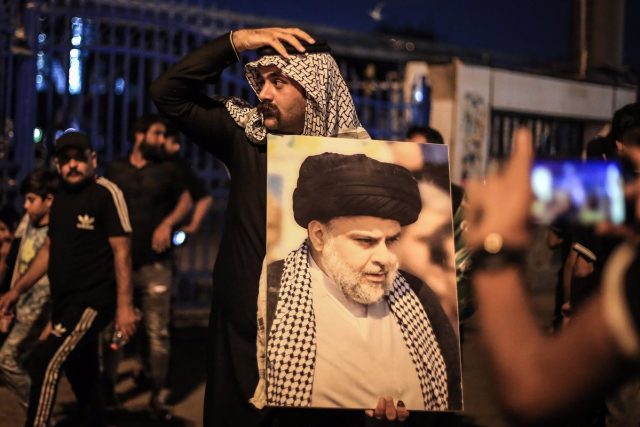 The Shiite cleric Muqtada al Sadr, leader of the main parliamentary bloc in the country, and the president of the Democratic Party of Kurdistan, Masud Barzani, have confirmed their intention to bet on a majority government led by the formation of the religious, who yesterday rejected any possibility to agree on an executive concentration for the country.

Both leaders highlighted the creation of a “cohesive strategic alliance”, with a view to “accelerating a majority government to fulfill its duties towards the Iraqi people, satisfy their aspirations, preserve their higher interests and consolidate the pillars of stability and prosperity,” according to a statement picked up by the official Iraqi news agency, INA.

This meeting takes place shortly after the parliamentary leader of the Sadrist bloc, Hasan al Adari, limited himself to writing on his Twitter account the phrase “reformist government with a national majority”, in an unequivocal gesture of support for the creation of an Executive configured according to the results of the legislative elections in October instead of guaranteeing the participation of all political forces.

It was Al Adari himself who confirmed on Saturday that Al Sadr had made the decision to “suspend all negotiations with the political blocs regarding the formation of the government” at the culmination of the definitive paralysis of the difficult talks to establish a new Executive .

Al Sadr categorically refuses to allow the Shia parties backed by Iran, big losers in the legislative elections in October, to join the Iraqi Executive, at least with the influence of past years. The best example of this tension is his rejection of the presence in the future government of any member of the Shiite State of Law coalition, led by former Prime Minister Nuri al Maliki.

If Al Sadr manages to form a majority government with his Sunni and Kurdish allies, the first consequence would be that Al Maliki and Fatah — the Shia political bloc to which the pro-Iranian Popular Mobilization Forces militias belong — could go into opposition. , in what would be a dramatic blow to the status quo in which the country’s national politics has lived in recent years, and amid threats of violence if such a scenario finally occurs.