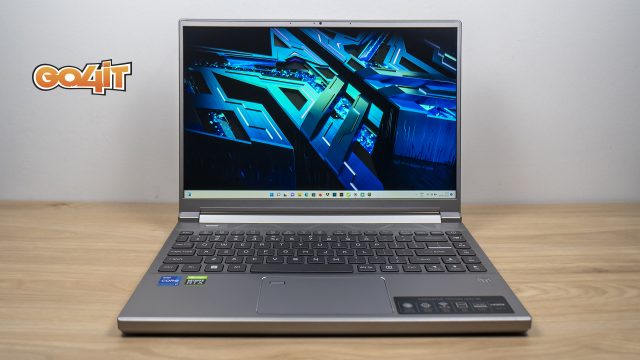 Last year, Acer began expanding its Predator line of gaming laptops to other types of users. The SE models are a combination of gaming and productivity computers, still offering powerful hardware capable of running the latest PC games, but with a number of features that might make it easier for those who have one computer for everything. The new Predator Triton 300 SE is almost identical on the outside to its predecessor, but enjoys improvements in almost every respect.

The design hasn’t changed much, despite improvements to the new Predator Triton 300 SE

The exterior design is probably the least changed between the two generations of the Predator Triton 300 SE. Last year’s model proved that Acer’s Predator laptops can also have a more “office-friendly” design, with a silver aluminum casing and not too many elements that stand out too much. The new model continues in this vein and moves the logo on the corner cover to the centre, while adopting a new screen format that changes the shape of the whole computer slightly. The 2022 Predator Triton 300 SE’s screen is 16:10 aspect ratio, providing more vertical space for productivity activities. Being a laptop, this means the whole computer is now a little bigger because of this, but not by much. Pretty much everything else is the same, from the keyboard to the trackpad to the webcam position at the top. The screen has very thin bezels on three of the sides, with a “chin” at the bottom where the electronics are housed.

While not exactly an “ultrabook,” the Triton 300 SE is a small and relatively thin computer. The ASUS G14 is still a more compact computer, but it’s clear that the two devices are in the same product class. On the sides, Acer’s model features ports like USB-A 2 and 3, HDMI 2.1, a 3.5mm jack and a Thunderbolt with USB-C jack, but lacks an SD or microSD card slot, unfortunately. For a computer that promotes productivity capabilities, such a reader is important. Fortunately, there’s a fingerprint sensor, integrated into the corner of the trackpad, for quick authentication into Windows via Hello. I would have preferred the integration of this sensor into the power button.

With high-performance gaming components inside, the Predator Triton 300 SE is surprisingly lightweight, even feeling relatively bare on the inside. However, housed in its case are a dual-fan cooling system and a large battery. The extra space seems to be used to allow more efficient airflow through the case.

The screen is one of the biggest upgrades

Compared to last year’s generation, the first obvious upgrade is, of course, the screen. The Predator Triton 300 SE uses a 14″ IPS display with QHD resolution in 16:10 format, i.e. 2,560 x 1,600 pixels. At this size, the resolution is perhaps even too high, making it hard to use without scaling options in Windows. I found scaling to 150% to be adequate for the size, with everything being extremely well defined. It’s very pleasant to read on this setting, and the text size is comfortable on this setting. Windows 11 recommends 200%, but your items get too large on that setting, and the advantage of resolution, which provides more screen space, disappears.

Read:  Moscow police stop people on the street to inspect messages and pictures on the phone As a gaming screen, however, it is very fast. In addition to the very high resolution, it can run at both 60 and 165 Hz. Even though the specs don’t suggest it’s a very special screen, I found it to be brighter than the market average, which is always important for a laptop that you also use for work. It doesn’t lack HD compatibility either, but I wouldn’t say it’s a screen that’s exactly right for movies or series. Firstly because it’s small in size, and secondly because HDR requires higher contrast than an IPS can provide without local dimming.

The Predator Triton 300 SE appears to be more similar to a MacBook Pro than other portable gaming computers on the market. Both the design, similar to Apple’s, at least chromatically, and the 16:10 aspect ratio suggest that this is Acer’s intention: to appeal to an audience that needs a work computer they can also play on in their spare time. Since there isn’t much gaming on macOS, those who want a complete solution may now have one. And in terms of configuration, the Predator Triton 300 SE doesn’t compromise much: it comes with an Intel Core i7-12700H processor, 16GB of RAM (DDR5), a 1TB PCI-Express 4.0 SSD and an NVIDIA RTX 3060 GPU. Basically, you have everything you need to run video games on high settings, but you can also edit videos or work in complex applications like CAD.

If you also want battery performance, the computer won’t last more than 3-4 hours, which isn’t exactly bad considering the powerful configuration. However, it won’t perform much better on economy profiles either. Still, we’re talking about a laptop that is basically built for gaming. The keyboard is well-spaced, even more airy than on other Acer models, but the top function buttons are always active. So Alt+F4 combinations don’t work unless you also have the Fn button pressed. Not often I’ve turned off the Wi-Fi completely by pressing F2 to rename a file. I haven’t found an option in the Predator Sense app that changes this behavior.

The whole fact that it’s a gaming computer, equipped as such, is also why this model can be very noisy, but can also run very hot. Turbo mode, which ensures that there are no artificial limits on components and keeps the fans at full throttle may be a bit much for normal use, but will ensure the highest performance and the most noise. However, my recommendation would be to use on extreme mode in most situations, which is a balance between performance and noise, and “silent” mode in normal use otherwise. Performance tests were of course done using the Turbo profile.

The processor brings a significant performance boost over the previous generation

When it comes to gaming performance, the new Triton 300 SE comes with tangible advantages over the previous generation. Even with the same GPU, the RTX 3060, we can see a performance boost in many titles that were previously CPU limited. That’s because the new i7-12700H comes with both newer generation 10nm cores with improved performance based on the new design, as well as a number of efficient secondary cores that help with multi-threaded tasks. Tests were conducted in 1080p and 1440p in 16:9 mode, even though the screen displays 16:10 on the penultimate settings profile for each individual game. In games that have the highest profile called Ultra I used Very High, while in games that use Very High as the maximum setting designation, I used High.

For games with advanced graphics, 1080p would be the best option to get more out of the display at 165 Hz, while in 1440p you can enjoy the extra definition added to the image due to the high resolution. However, most titles, apart from some really fancy ones like Cyberpunk, Metro Exodus Enhanced and Red Dead Redemption 2 couldn’t exceed 60 FPS on these high resolution settings. With a few tweaks to the settings and the use of DLSS, even these titles can run at high framerates. In fact, all titles that benefit from upscaling techniques can run better than that, these results are just the baseline performance on High/Very High settings for these resolutions. I was pleasantly surprised to see that Acer used a very high performance SSD on this model, after lately we’ve seen more companies turning to PCI-Express 3.0 models with slower speeds.

The Predator Triton 300 SE is a good hybrid between a productivity and gaming laptop, but it doesn’t excel in either category. It does, however, offer one more option for those who need a computer they can use for everything. A card slot and a more powerful GPU would have solved all the problems, but would probably also require better cooling, as right now, the computer is a bit on the edge.