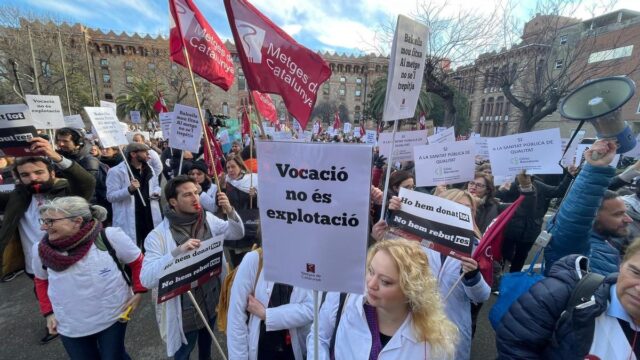 Some 9,500 doctors, according to the mossos, both from hospitals as primary care centers (CAP) have endorsed the strike this Wednesday and they have demonstrated in front of the Conselleria de Salut in defense of public health. This mobilization is added to the one that has taken place in Sant Jaume square. There they have joined public school teachers and others health profiles (nurses, auxiliaries), totaling some 5,300 people. Between the two events, about 15,000 workers in the public services have stopped work today to denounce the degradation of the two pillars of the Welfare State: health care and education.

The mobilization of physicians, called for by the. Metges de Catalunya (MC) union, has been the second major public health strike in the last four years in Catalonia. In 2018, primary care physicians had already mobilized, but this time those in hospitals have also joined in. And they argue similar reasons to those fought for four years earlier: impossible agendas y working conditions that could be improved.

“Mental health is fundamental” or “Aragonès, pay more” are some of the slogans that have been heard in the demonstration this Wednesday, which will have its continuity tomorrow from 10 am in Sant Jaume square. On Friday, at 15.30, the union, employers and Salut will resume talks to return an agreement and try to call off the strike scheduled for February 1, 2 and 3.

The ‘conselleria’ Accuses the union of having a retributive “red line”: doctors, according to Salut, claim the direct assignment of a salary supplement in the payroll, something which must first pass through a negotiating table. The union assures that its red line is welfare: it asks for a limit on physicians’ agendas, while the department bets on self-organization.

Affectation in the CAPs

While doctors, arriving from other Catalan cities such as Girona, demonstrated in front of the Salut headquarters, walked down the Rambla de Brasil and headed to Sants station (to symbolize the exodus of professionals), some primary care centers (CAP), such as the Raval Nord or Drassanes were noticing the absence of professionals. They were either empty waiting rooms or overcrowded emergency rooms (in the case of Raval Nord), where patients piled up in a day of strike followed, according to Metges de Catalunya, by 75% of its physicians.

Read:  This is the side effect of paracetamol

“We strike to improve our work. To improve the training of residents: they use us as labor,” he said. Roser Termes, MIR of surgery at the Hospital Clínic de Barcelona. “We MIRs work very hard, long hours and we fill gaps in the number of attending physicians, specialist positions because there is no staff.” added the 29-year-old.

Lack of personnel is the main problem of the public healthcare system, not only in Catalonia, but in the whole of Europe. in the next few years, an entire generation of doctors for which there is no replacement because it has not been well planned. This is something denounced this Wednesday by the union. “Here today, we are the same [9.500 médicos] who will retire in Catalonia in the next decade.” said the secretary general of Metges de Catalunya, Xavier Lleonart. For the union, participation has been. “spectacular”.