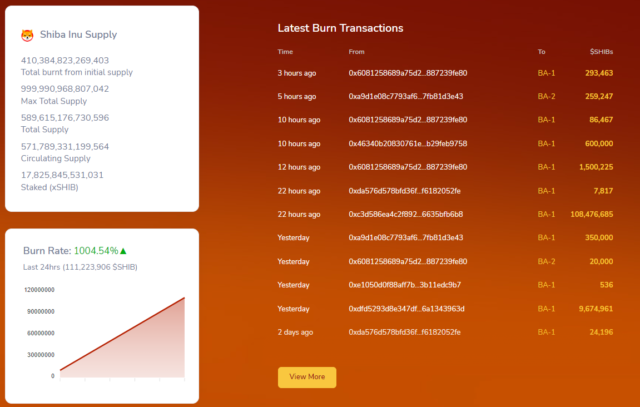 The burn rate of one of the biggest meme tokens on the market is on the rise again. In the last 24 hours, over 110 million SHIB tokens have been removed from circulation, and the total number of burned tokens continues to rise.

The 700% rise comes in the middle of SHIB’s reversal from the significant resistance level.

A high burn rate on the Shiba Inu network is the result of increasing activity on the blockchain. The more users transfer, pay, or otherwise use Shiba Inu, the more tokens are sent to the burn address, where they will stay for good.

Read:  Binance pulls out of FTX deal after seeing books, reports of mismanagement of funds.

As we have mentioned many times, a burn of at least 100 million SHIBs per day would be enough to slowly push Shiba Inu towards scarcity and noticeably decrease the pressure on the token market performance.

Unfortunately, SHIB’s latest market performance was not as desirable as it could have been, as the asset was unable to break the three-month-old trendline resistance, which acted as a barrier between the uptrend and the downtrend.

The trend reversal most likely resulted in a spike in the number of trades on the network, as investors likely tried to close their positions quickly to avoid further losses caused by a potential market-wide reversal.

Read:  Bitcoin 'lags behind' in the fight against climate change

Fortunately, Shiba Inu was not as heavily impacted as other assets, and the 10% correction around the resistance level was not fueled by the huge liquidation volume in the market. At press time, SHIB is changing hands at $0.000011 and can still reverse to the upside, as it successfully remains above the 200-day moving average.