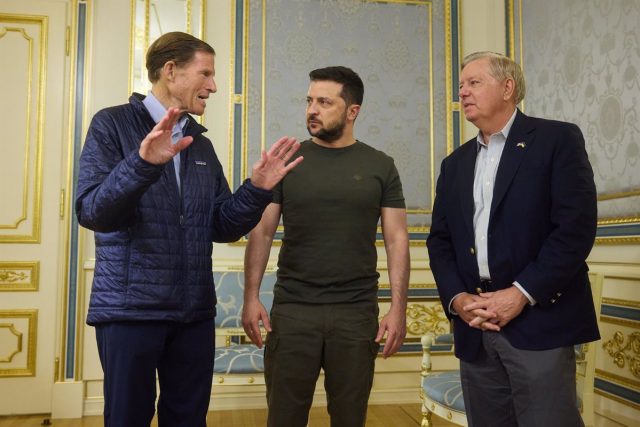 U.S. Senators Lindsey Graham and Richard Blumenthal, from the Republican Party and the Democratic Party, respectively, have introduced on Wednesday a bill to designate Russia as a State Sponsor of Terrorism,

The proposal has come months after members of the Senate Judiciary Committee called on the Biden Administration to do so, ‘The Hill’ has reported.

The bipartisan duo is seeking to make Russia the fifth addition to the U.S. list of state sponsors of terrorism, joining North Korea, Iran, Syria and Cuba.

The designation would remove Russia’s sovereign immunity from U.S. courts and reduce foreign assistance and exports to the country, according to a statement jointly issued by Graham and Blumenthal.

This bill follows a resolution passed by the Senate in late July that called on Secretary of State Antony Blinken to impose the designation on Russia.

“If (Russian President Vladimir) Putin’s regime is not a state sponsor of terrorism after all this, then the designation makes no sense,” Graham has said in the missive.

“The events of these past days and weeks have demonstrated more than ever that Russia should be designated as a state sponsor of terrorism,” Blumenthal has argued, for his part.

Biden, however, has previously rejected the move, believing it could have “unintended consequences” for both the U.S. and Russia.

The Kremlin, for its part, welcomed the U.S. president’s rejection of the Senate resolution, considering that the mere debate on this issue is already in itself “monstrous.” “It is good that the (U.S.) president responds in this way,” Russian government spokesman Dmitry Peskov said in a television interview picked up by the TASS agency.