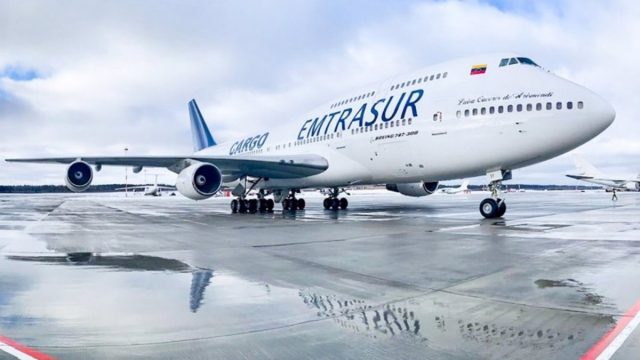 The 12 of the 19 crew members released last Tuesday by the Argentine Justice of the Venezuelan-Iranian plane that had been held since June at Ezeiza International Airport have arrived this Friday in Venezuela.

The first group of crew members of the Venezuelan Emtrasur has landed at the Simón Bolívar International Airport of Maiquetía, as confirmed by the vice-president of the Ministry of Communication, Freddy Ñáñez, in a press release.

“Arrival in the country of the first group of crew members of the Venezuelan plane hijacked in Argentina,” Ñáñez said in a message on Twitter.

The workers of the aircraft, which continues in Argentine territory –as the other seven crew members– have been received by the Minister of Transport, Ramón Velásquez, who has emphasized that the crew members were held “illegally” by the Argentine authorities, as reported by ‘El Universal’.

On their return trip to Venezuela, the 12 crew members made a first stopover in Bolivia, to finally travel to Caracas.

The Federal Court of Appeals in the Argentine city of La Plata confirmed on Tuesday the lifting of the ban on the departure from the country of 12 of the 19 occupants of the Venezuelan-Iranian plane that has been held in Argentine territory since last June.

The condition established for the departure from the country of the released crew members is that they fix an address and report once a month to the Argentine embassies in Iran and Venezuela.

The court’s decision was made in the framework of the case that was initiated after the arrival, last June 6, of a flight of the Emtrasur company at Ezeiza International Airport, which led to an investigation into the activities of the crew members of the aircraft, due to the suspicion of alleged links with terrorist activities, according to the above mentioned agency.

The plane’s crew, made up of 14 Venezuelans and five Iranians, has been detained all this time and lodged in a hotel in the vicinity of the airport.