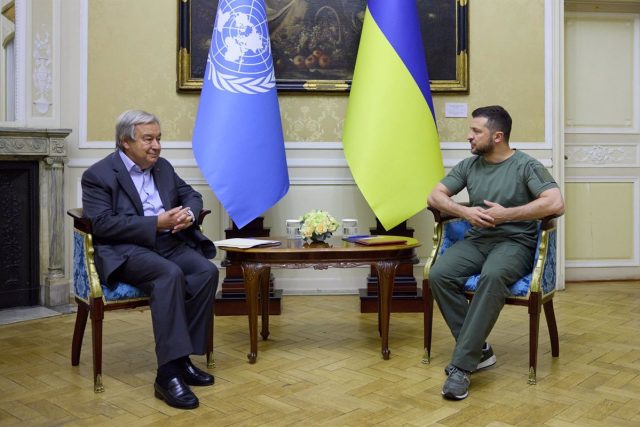 The president of Ukraine, Volodimir Zelenski, has discussed this Thursday in Lviv with his Turkish counterpart, Recep Tayyip Erdogan, and the UN secretary general, António Guterres, the possibility of a diplomatic solution to the war, although he has again made it clear that he will not negotiate until Russia does not remove all its troops from Ukrainian soil.

Zelenski, who initially received his two guests separately, agrees with them that a dialogue is possible, but for now there is no indication that this will come in the short term, despite the agreement for the export of grain in which Turkey and the UN acted as mediators.

Guterres hopes that this pact between Kiev and Moscow is “just the beginning,” so he has advocated continuing in this “spirit of compromise” to move forward. “The positive milestone on the food front reflects a victory for diplomacy,” he has said in a public appearance, according to the DPA agency.

In the same vein, Erdogan has pointed out that during the tripartite meeting the options to transform this “positive atmosphere” into “a permanent peace” have been evaluated, for which he has once again offered himself as a mediator. Istanbul already hosted in March the highest level contacts to date, without practical results.

“The important thing is to find the shortest and fairest way to the negotiating table,” said the Turkish president, in a statement reported by the official Anatolia news agency, which also said that Erdogan will soon present the conclusions of Thursday’s meeting to Moscow.

The three leaders share their concern about the growing tensions around the Zaporiyia nuclear power plant, where Russian and Ukrainian authorities anticipate a possible “provocation” from the rival side. Guterres has insisted that any attack on these facilities would be “suicidal”.

Read:  Afghanistan and Pakistan form a committee for the conflicts on the Durand Line

Erdogan has called to avoid “a new Chernobyl,” alluding to the 1986 nuclear disaster. The International Atomic Energy Agency (IAEA) has requested access to the area and both Zelenski and Guterres have called for the withdrawal of Russian troops.

Erdogan has used his trip to reiterate his support for Turkey and promote a memorandum committing his country to participate in the reconstruction of infrastructure. Kiev sees in Ankara “a strategic ally” as well as “reliable”, according to a statement from the Ukrainian Presidency.

The first practical collaboration resulting from this agreement could be the reconstruction of the bridge connecting Kiev with the localities of Bucha and Irpin, the scene of massacres of civilians at the hands of Russian troops and destroyed in the early stages of the current conflict, according to the official note.