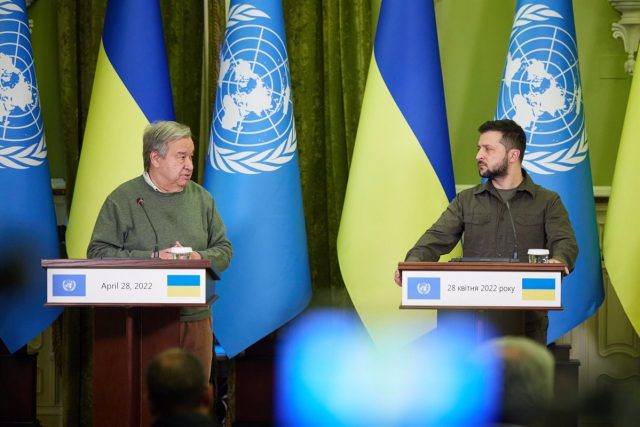 The presidents of Ukraine and Turkey, Volodimir Zelenski and Recep Tayyip Erdogan, respectively, and UN Secretary-General António Guterres will meet Thursday in the Ukrainian city of Lviv, the United Nations has reported.

The three-way meeting comes after an “invitation” from Zelenski himself, according to sources in Guterres’ office consulted by Europa Press and who have not given further details. Also the Turkish Presidency has confirmed the appointment.

Among the aspects Ankara expects to discuss formulas with which to end the conflict and talk about the mechanism established to export grain from Ukrainian territory, according to the Turkish news agency Anatolia.

After his first stop in Lviv, Guterres will move on to Odessa, one of the three exit points of Ukrainian grain. Precisely this Tuesday, the first ship chartered by the World Food Program (WFP) to export grain has departed from Ukraine, thanks to an agreement between Kiev and Moscow mediated by the United Nations and Turkey.

In fact, before his return to New York Guterres will then travel to Istanbul, to visit ‘in situ’ the coordination center from which the agreement for exports is examined. The UN sees it as key to softening the effects of the Ukraine war on global food security.

Read:  Death toll rises to 19 children and two adults in a shooting at a Texas school in the United States