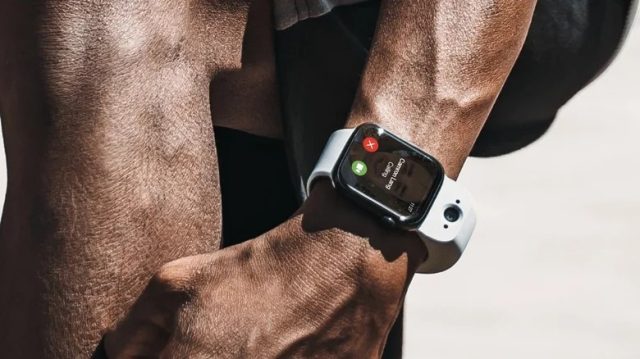 The first smartwatches, such as the Galaxy Gear from Samsung, even came equipped with a camera, but this component was quickly removed from these devices. However, it seems that there is some demand for such accessories, as in 2021 Wristcam was launched, an Apple Watch bracelet that could take photos and videos. Now, however, Wristcam is becoming even more useful, allowing you to make video calls directly from your watch.

Wristcam is a bracelet equipped with two cameras, one for self-portraits, 2 megapixels, and one for photos and videos in the opposite direction, 8 megapixels. Until now, they could be used with the Wristcam application to take photos and recordings, which could then be sent to social networks. The advantage was that you could take a quick photo without taking your phone out of your pocket, or without holding it with you if you went for a run, for example.

Read:  Obesity cure: brain implant that "shocks" you until you stop eating

The Wristcam now allows video calls on the Apple Watch

The presentation clip describes various use cases, such as video calls during a running session, at sea, surfing, basketball court, or hiking. Probably the idea behind this feature is to use it when you don’t have your phone with you, but you also have an Apple Watch model with 4G connectivity, which allows internet access without a smartphone.

Read:  Samsung has launched Galaxy Enhance-X, an app that promises to improve the look of less-than-stellar photos Unfortunately, the Wristcam camera cannot be used with FaceTime, the video call service integrated in iOS and watchOS. While the Apple Watch can receive calls via FaceTime, they are just the audio type. However, the camera on the Wristcam is not recognized by the Apple service.

This seems to be an expensive and complicated solution to this problem. At $ 300 for a camera bracelet, almost as much as a new Apple Watch, and the need to use the dedicated app for calls with other users, this accessory seems to be a niche one, and the video calling feature could be the much of a curiosity among the few Wristcam customers.