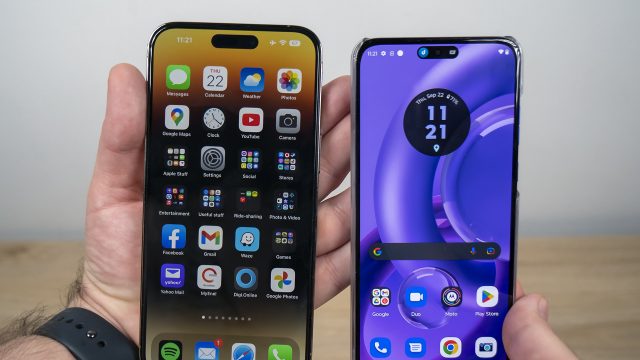 It took less than a week after the launch of the iPhone 14 series before a similar Dynamic Island solution was released for Android devices. An app called dynamicSpot can be downloaded on Android phones for free from Google Play, offering similar functionality to what Apple offers on its new Pro phones, and even a few different capabilities.

The DynamicSpot name suggests that this capability is specifically dedicated to phones that have a centrally positioned front-facing camera, expanding the area around them to be similar in design to Apple’s Dynamic Island. This is where recent notifications appear, or the phone’s status when it’s charging, while you can choose which notifications appear there and even customise the size of the ‘island’.

We’re still not talking about functionality that’s 100% comparable to the iPhone’s, or even animations that are as fluid, but it’s an early app that could evolve in the future. There’s even a “Pro” version that costs 19 lei and unlocks some extra capabilities, such as displaying the “island” on the lock screen so you can interact with certain features from there. In theory, dynamicSpot should work on any Android phone, regardless of whether or not it has a centrally positioned front-facing camera. This is a temporary solution, however, as there are already Android phone manufacturers interested in integrating something similar into the basic experience of their phones. Realme, for example, has started asking fans if they’d like such a feature on their devices.

Read:  Surprise at Lidl for music lovers. It's sturdy and looks good

Dynamic Island demonstrates again that Apple has a major influence on the smartphone market. The “copying” of this feature comes after other manufacturers initially scoffed at removing the headphone jack, the notch, or removing accessories from the package, and soon after adopted similar strategies.