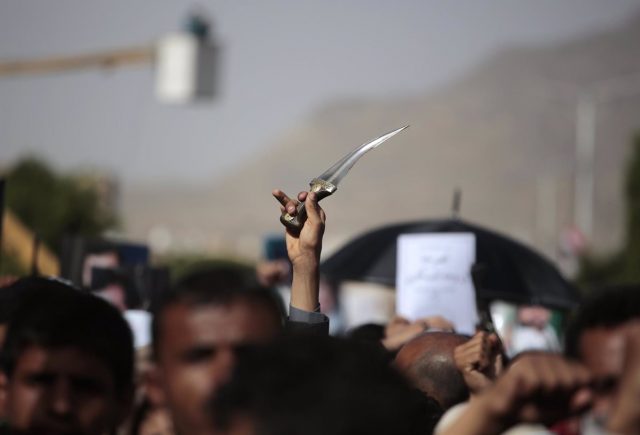 Yemeni authorities have accused the forces of what was once the country’s major opposition party, Al Islá, of rebellion after a week of violent factional clashes in Shabwa province that highlight the ongoing internal tension within the Presidential Leadership Council (PLC) that is pitted against the Huthi insurgency.

It all began on Monday when, local Yemeni government sources told the correspondent of the official Chinese news agency Xinhua, “military leaders sympathetic to al-Islam” began advancing into Shabwa from neighboring Marib province before accusing the party of “attempting to take over authority in the oil-rich province”.

Despite attempts to negotiate a cessation of hostilities, the party, linked to the Muslim Brotherhood, the world’s largest Islamic organization, eventually threatened to leave the CPL after learning that local authorities had ordered the dismissal of one of its commanders, triggering serious street clashes between rival security units in Ataq, the provincial capital.

Al-Islah critics accuse the formation of maintaining complicity with the Huthi insurgency and of being, in general, toxic actors against the fragile unity of the Yemeni authorities in their fight against the Huthis, a war characterized by constant friction between the internationally recognized government and its separatist allies in the south of the country.

Read:  Scholz assures that there are currently no "plans" to admit Ukraine into NATO

This tension extends to the international level, mainly Saudi Arabia and the United Arab Emirates, major representatives of the international coalition assisting the Yemeni authorities, sometimes dividing loyalties among the members forming the Yemeni national alliance against the insurgents. Saudi Arabia extends its courtesy to government forces while the UAE is more sympathetic to the separatists.

Thus on Wednesday, Shabwa Governor Awad al Awlaki ordered the paramilitary forces of the Giants Brigades to carry out an operation to suppress al-Islah forces, in an escalation of clashes that has so far left 28 dead and more than 60 wounded in the province.

Yemeni authorities have since ordered the removal of several military and security leaders accused of organizing a rebellion against the local government in Shabwa, according to Yemen’s state-run Saba news agency.

Read:  Chinese research vessel docks in Sri Lanka despite pressure from India and the U.S.

The situation in Ataq now appears to be under control. The city is now the scene of patrols by forces aligned with the so-called Southern Transitional Council, the political alliance representing government-allied separatists in the cause against the Huthis. However, this Saturday, the provincial governor’s office condemned the attacks by al-Islah forces, a party “that seems to have adopted,” it lamented in a statement reported by the South24 portal, “a rebellious stance in the governorate.”

These clashes also emerge in the midst of a cease-fire that has brought a respite to the Yemeni population, suffocated in the worst humanitarian crisis in the world. The EU mission in Yemen this week declared itself “very concerned about the recent violence in Shabwa and the loss of life,” before welcoming “the efforts of Yemeni President Rashad al Alimi and the CPL he is leading to reduce the gravity of the situation.”

“Fighting like this,” analyst Abdulghani Al Iryani notes for his part to Deutsche Welle, “could hinder any kind of negotiations that the PLA might undertake with the Huthis for a definitive ceasefire.”