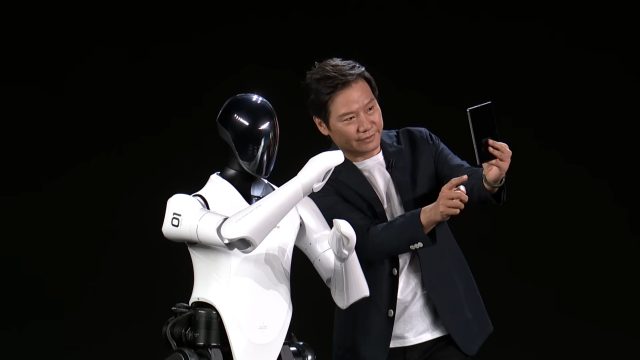 Tesla’s Optimus robot, or “Tesla Bot” is an odd concept to say the least from a company best known for electric cars. But it seems that the mere fact that Elon Musk announced such a robot on stage last year has already sparked a wave of “clones”, with the first such model being produced by Xiaomi itself, which unveiled a humanoid robot CyberOne at the launch of its new MIX Fold 2. This isn’t even Xiaomi’s first robot, with the company announcing a clone of Boston Dynamics’ Spot robot dog last year.

CyberBot is another Xiaomi “clone” of an existing robot

Of course, CyberOne is a prototype and not a final product. While Tesla promises that its humanoid robots will be able to take over some repetitive and tedious tasks from factory workers, Xiaomi’s robot seems to be a solution in search of a problem. At the moment it doesn’t have much utility, but it’s equipped with all sorts of sensors and AI algorithms to help it identify people and other objects around it.

CyberOne is one of the largest humanoid robots today, standing 1.77m tall and weighing 52 kilograms. It can pick up and carry objects weighing up to 1.5 kg in each hand, and can even respond to such commands from humans. However, the motors that control the hands can’t do much more force-intensive tasks, as each weighs just 500 grams.

Xiaomi’s robot uses a sensor system that gives it 3D vision, Mi-Sense, along with advanced algorithms that allow it to identify certain people, certain gestures or even facial expressions. CyberOne can identify 85 sounds around it, and the robot’s face is covered with an OLED panel that can display various information or even interactive content.

Unlike Tesla, which hopes to have a working prototype of the Optimus in September and probably hopes to put it to “work” in its factories in the near future, Xiaomi has no such ambitions at the moment. It seems, however, that Xiaomi’s robot is more like a sort of bipedal virtual assistant that can also interact with surrounding objects, whereas Tesla’s robot is a machine intended for production lines.