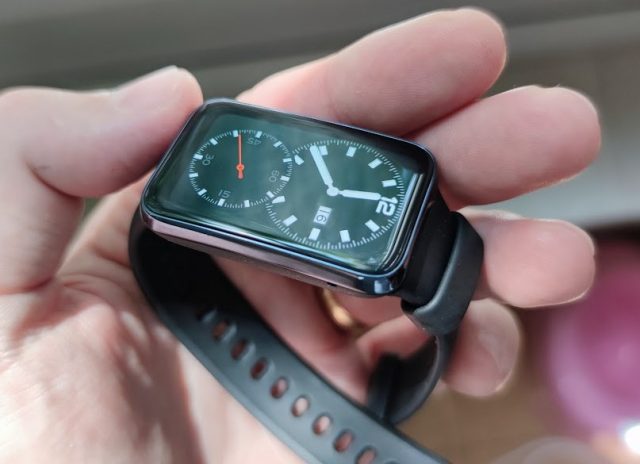 Xiaomi announced the Band 7 accessory series as early as the middle of this year, but only the non-Pro version has arrived in Europe, with the more advanced Smart Band 7 Pro model remaining as an exclusive for the Chinese market.

Created to compete with models like the Huawei Watch Fit, the device is more of a smartwatch than a traditional fitness bracelet. The Smart Band 7 Pro comes with a larger screen than the non-pro model, metal construction and a selection of sensors and functions for monitoring sports activities.

Otherwise, the accessory is very similar in capabilities to the “standard” Smart Band 7 version. It comes with sensors for pulse rate, blood oxygen saturation, sports and sleep monitoring functions, as well as a GPS for recording the routes you run. The 1.64″ screen comes with an always-on function, and while it doesn’t look much bigger on “paper” (compared to the 1.47″), it is much wider than we find on the base model.

The battery isn’t very big, at 235 mAh, but promises up to 12 days of use on a single charge. Unlike the Smart Band 7, the Pro model also benefits from NFC for contactless payments.

The Xiaomi Band 7 Pro comes in black, white or gold casing variants, as well as white, pink, orange, green, black and blue wristbands. While the standard equipment was priced at €60, the larger screen, NFC support and GPS receiver offered in addition by the Pro model raises the price to €99. Even so, Xiaomi’s offer is a very tempting one, given the level of features on offer.

Read:  Instagram has primarily enabled support for encrypted messages for users in Ukraine