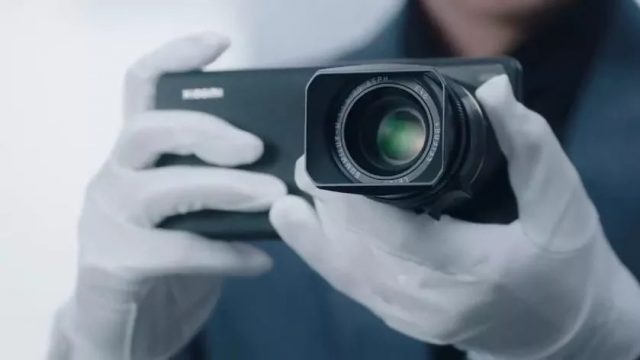 Highlighting the collaboration with Leica specialists, the Xiaomi 12S Ultra Concept is the first and so far only smartphone compatible with Leica M lenses developed for mirrorless cameras.

Equipped with the Sony IMX989, the first 1-inch sensor developed specifically for smartphone devices, the Xiaomi 12S Ultra Concept is uniquely tuned to rival the photo performance of a mirrorless camera. All you have to do is pull a Leica M lens out of your pocket and attach it to the ingeniously adapted mounting system in the camera trim, giving the smartphone outstanding zoom capabilities.

It’s worth saying that while other manufacturers have experimented with this concept (e.g. Motorola developed a snap-on lens system for the Moto Z series) this is the first smartphone to truly support the use of interchangeable lenses, identical to those already available for dedicated cameras.

The only drawback is that the accessory used for demonstration purposes, a Leica Summicron-M 35mm lens, costs more than $3000 by itself. So you’d have to be a truly eccentric photography enthusiast to pair such an accessory with a smartphone. However, if your budget is almost limitless and you want to enjoy the best possible image quality using your favourite smartphone, then you’ll find that you can even shoot in RAW mode, with 10-bit depth for each colour channel. The capture app also supports advanced features such as histogram, focus peaking, etc.

Read:  The last hope for the BlackBerry 5G phone is dead: OnwardMobility is shutting down

For now, Xiaomi says that the demonstrated prototype will not be commercially available, and is just an experiment to show how far a smartphone camera’s capabilities can go.