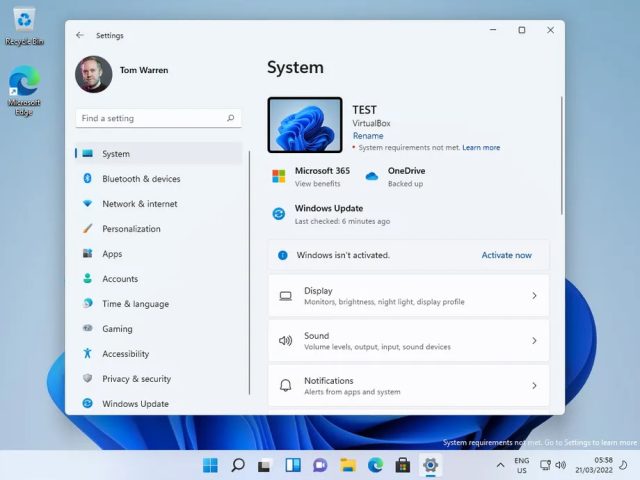 Microsoft’s plan to differentiate fully compatible Windows 11-compatible PCs from those on which the new OS is installed without the company’s consent seems to have come in handy. The new watermark will also appear for perfectly legitimate installations, made by activating a valid license key.

Unlike Windows 10, the new version of the Microsoft platform comes with strict hardware requirements, we could even say extravagant. But as long as the old OS stays current, with Windows 11, almost anything is allowed, including extravagant requirements, such as the presence of a dedicated chip for PC security features. However, the change required is one with long-term benefits, in the sense of migrating users to new generations of PCs that include specialized hardware to increase the level of security.

Tested first at the experimental stage, the new watermark is already included for Windows 11 versions distributed through the Release Preview channel, the change appearing on the “list of improvements” attached to the new Windows build.

Read:  The Fitbit Ionic smartwatch, withdrawn from the market. The company offers money back to users and warns of the risk of skin burns

The problem is that with the exception of state-of-the-art PCs and laptops, the vast majority of hardware in circulation does not include the security technologies promoted by Windows 11, without which the Windows 10-related OS would still be subscribed to a endless series of patches, developed with great effort by Microsoft to fix the latest bugs and software vulnerabilities.

In the first phase, Microsoft drew a clear “boundary” between the two versions of Windows, the new OS can only be installed on PCs that support hardware-related security technologies. But inevitably, the Windows community has found ways to install the latest Microsoft OS on incompatible devices, and the prospect of Windows 11 security becoming a joke is becoming as real as it gets.

Left without the option to block forced Windows 11 installations on otherwise incompatible devices, Microsoft instead frustrates users by displaying a permanent watermark on the desktop, very similar to the one used for non-activated Windows installations.

Specifically, the message takes the form of a warning permanently displayed on the Windows 11 desktop: “System requirements not met. Go to settings to learn more ”. Although it does not have an expiration date and does not produce other effects, the alert is still as permanent as possible, users having to choose between installing a dedicated TPM module and completely replacing the PC declared incompatible.